Supposedly based on a true story, after several brutal attacks by an assailant she cannot see, a woman consults medical professionals and later parapsychologists to find an answer for what’s going on.  Does she have mental problems, like the doctors seem to think. or are the ghostbusters right in thinking that there’s a malevolent spirit doing harm?

Carla Moran (Hershey) is a widowed mother of three children, working a job and going to school.  She leads a rough life but she’s a strong woman who can make it.  The last thing she needs though is a angry spirit that beats and rapes her constantly.  What do you do?  Where do you go?

After the first several attacks, she seeks help in a psychologist, Dr. Snyderman (Silver) who does what he’s supposed to do: diagnose and treat.  He believes the attacks to be caused by something in her past reaching out to her but when the attacks start to become more frequent and in front of her children, no less, the tension escalates because we the viewers know there’s something going on. 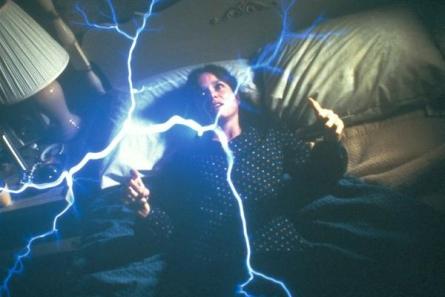 Question: Is this a still from “The Entity” or “Highlander 2?”

After another attack in her friend’s apartment, destroying the whole place, they both go to the library to do some research themselves since the doctors believe her to be nothing more than a head case.  It’s at the library where Carla runs into a couple of parapsychologists who just so happen are interested in supernatural events.  Well does she have a story for these guys, it’s like an even more serious version of Dana visiting the Ghostbusters for the first time (I’m assuming you’ve seen Ghostbusters, if not, please disregard the last sentence.)

At first these guys are very suspicious.  After all, they did meet a lady who sees ghosts back at the library.  It takes less than thirty seconds of items moving around on their own to convince them that they have a possible poltergeist on their hands and they want to document everything they see.

There’s a major shift in tone throughout the middle of the film.  While there are still random attacks thrown in, apparently we haven’t seen enough ghost rape, the movie goes into a medicine vs. science debate.  Dr.  Snyderman believes he can help Carol his way and hates that the guys trying to prove ghosts exist and might be using her in a way that doesn’t help her situation at all.  While he never witnessed the supernatural happenings himself, everybody else has! Her kids, her best friend, her boyfriend, the ghostbusters, etc.  She clearly has a ghost problem and analyzing her past is a waste of time.  We could’ve got more cool science stuff in lieu of this drama. 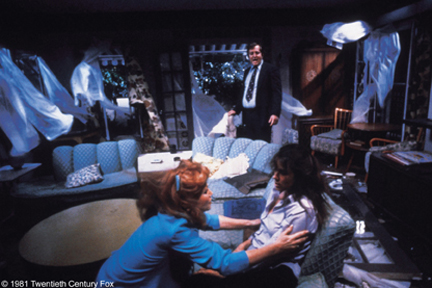 Do you feel a draft?

The movie tries to distance itself from being a definitive scary movie, choosing to show possible explanations for what was happening.  It could’ve been more effective that way had the attacks not been so brutal and frequent.  This is a scary movie but there are some long lulls in between the good scares, not just the rapey ones.  There are more of those than I care to count and can be a tough watch especially due to the special effects.

During some of the scenes where Carol is getting touched, the effects team constructed a body suit that looks like its getting touched and grabbed, like there are invisible hands.  Her real head would be poking out so she could act and react.  Thanks to that added sense of realism, these attack scenes are more graphic and maybe disturbing than they could’ve been.

Who you gonna call? These guys…I guess.

Barbara Hershey does an amazing job in this movie as her character goes through so much agony and embarrassment and still puts on a happy face for her kids sake until she eventually breaks down but eventually fights back towards the end.  She’s backed up with a good cast who do their best to make us believe with their widgets and dohickeys that ghosts or spirits are out there!

If you’re looking for a full on horror movie, you’ll only get half of that here.  The middle portion of the movie sees the scares take a backseat to the drama of doctors fighting over what’s right for this woman. Thankfully this is sandwiched between a scary first act and pretty cool finale.

Story: 7 – I can’t tell how accurate this is “based on true events” but I was all for seeing what was going to happen in the end!

Blood: 1 – The attack scenes can be graphic but not in a gory way. Thankfully.

Nudity: 5 – There’s a real nude scene from Mrs. Hershey and a couple of scenes with a naked prosthetic.  None in a pleasant manner though.

-There was a dream sequence cut from the movie involving Hershey and the actor playing her son (Labiosa.) Based on a plot thread earlier on in the film, it was cut because it was deemed too controversial.

-Part of the score for this film was used in Quentin Tarantino’s Inglourious Basterds.

-Director Martin Scorcese considers this one of the scariest movies he’s ever seen.