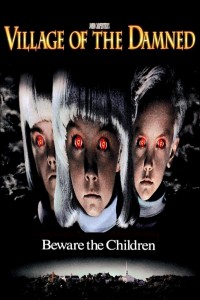 After a town of people black out, several of their women folk appear to be mysteriously pregnant. Government med teams convince them to keep the babies for research purposes and soon we have almost a dozen blonde-haired children that grow up together who develop mysterious mental powers and make people do bad things to themselves. Little brats.

It’s just another day for the people of Midwich, California until a freak act of nature blacks out the entire town for several hours. Alan (Christopher Reeve) is a local doctor whose wife gives birth to Mara, one of the demon children that becomes the ring leader. Dr. Verner (Alley) shows up after the black out to watch over the children as this isn’t the only place where this has happened.  Alan is initially just happy to have a child but his wife dies in an accident by a cliff and slowly learns through discussions with Dr. Verner that it could be his daughter to blame for her death.

Get me a lollipop…then burn yourself.

All the women give birth to blonde haired boys or girls except for one woman whose alien baby dies during childbirth. As the children grow up, they pair up with their mates except for one boy, David, who is without a mate and is an outcast to the other children. He develops human feelings while the others are cold, heartless children that are certainly mature beyond their age. They also have the ability to read others thoughts and make people do whatever they want (usually committing suicide.) The townsfolk are scared and try to rise up but the children can easily control them as they grow more powerful by the day.

The children all act like Data from Star Trek, emotionless, though unlike Data they don’t care about feelings. They look to take over the planet and usurp humans as the dominant species. I suppose that might be scary to some people but it does nothing for me. How they dispatch their victims can be vicious (one character performs an autopsy on herself) to hilarious (someone driving into a large oil tank or just walking off a cliff.)

Get your own damn lollipop. I’m Superman, bitch.

John Carpenter previously had success remaking another old film, The Thing From Outer Space, and transforming that into the classic, terrifying film we know as simple, The Thing. I’ve never seen the original Village of the Damned so I’m not sure what Carpenter was looking to bring to the table with this remake, but unless little blonde-haired children mentally killing people is your idea of scary, the movie fizzles out more often than I care to like. It’s a well-made film, just not that scary, certainly nowhere near Carpenter’s best work and that’s probably the biggest disappointment. The movie is only average.
TL;DR

Story: 7 – Alien children with mental powers attempt to take over the world and only Superman can save the day.

Blood: 3 – Light on the blood though there is a broom impalement, a couple of charred bodies and several gun shot wounds.

Overall: 5 – Hardly a terrible movie but I was hoping for better from the big JC.