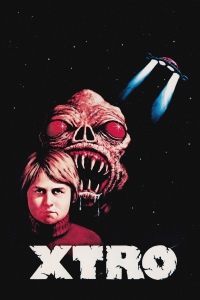 A man is abducted by aliens and returns three years later to see his wife and son again but while his son is happy to see him, his wife has moved on.  Bad British drama and aliens together at last!

Sam is playing with his son, Tony, when a light in the sky appears and Sam is abducted by what appears to be aliens.  Sam’s wife, Rachel, moves on years later while her son still yearns for his father’s return.  Flash forward three years and a light in the sky appears again dropping something in a forest.  An alien creature bursts out of a pod and within a short period of time kills several people, including a woman that it impregnates and gives birth to a full bodied man.  That man is Sam.

Sam returns home, claiming he doesn’t remember what happened in the last few years, though he lets on more to Tony when they’re alone.  Sam is very different, apparently needing to feed on anything from lizard eggs to human flesh.  Whatever works.  Rachel and her fiancee have trouble believing what Sam tells them but he doesn’t seem to pose an immediate threat.  Sam has actually transmitted something to Tony that allows him to control objects with his mind, though being a child, Tony goes a little overboard and winds up killing an old lady in the apartment and his beautiful nanny and starts harvesting eggs from his victims.  And thus begins a possible alien takeover.

It’s hard to describe how bad Xtro really is.  While the initial story is certainly acceptable and the first ten minutes start off fine for a sci-fi/horror flick, the movie fails to deliver anything remotely frightening and is just a ridiculous mess.  In fact, it’s gets sillier as the movie goes on.  Whatever Sam has for powers, he doesn’t seem to let on, but Tony brings his toys to life to murder people.  So we have an eight-year old killing random people by getting a giant GI Joe-like figure, a circus clown or even a cougar or puma to do his dirty work.  Beyond ridiculous.

The effects are mostly laughable, though I’m not sure how great they were to begin with in 1983.  I can’t even begin to explain how terrible the music is.  The effects are probably from random Doctor Who episodes but the godawful synth music is hilariously inappropriate for most of the movie and is grating to the ears.  The acting is decent by comparison but if that’s the best thing I can say about the movie then Xtro is in trouble.

Overall, Xtro was a bit of a challenge to watch.  It’s a silly mess with cheesy effects and awful music that almost drove me away from finishing the movie, which means it’s not even good in a bad way.  A painful watch and an easy recommendation to avoid.  Apparently there are two sequels so I can’t wait to do those later.

Story: 2 – Has some decent ideas (possibly lifted from Alien) but it’s a complete mess of a movie.

Nudity: 7 – The lovely Maryam d’Abo, playing the nanny, shows off her beautiful body a couple of times.

Overall: 2 – There is no reason in the world why you should want to watch Xtro.  Aside from a good dose of nudity, it’s a bad drama with aliens.  Avoid it.

-The director went on to make two more sequels with the intention of making a fourth.  Oh god.