A group of strangers on a tour of some old catacombs get trapped in a crypt along with an elderly crypt keeper who shows them grim futures before they leave.

Death lives in the vault of horror!

Years before HBO got the rights from EC Comics to make their wonderfully scary yet darkly humorous “Tales from the Crypt” television series, British film company Amicus released a film in 1972 based on the horror comic series.  Instead of focusing on just one story, the film is an anthology of shorts that are tied to the main plot, which is about a group of random people who happen upon an old crypt keeper (Richardson) who shows each of them their futures as a warning.   Let me run through the short stories real quick:

…And All Through the House – A woman kills her rich husband on Christmas Eve but she’s attacked by an escaped mental patient dressed as Santa Claus.  Unable to call the police until she gets rid of the body, she has to balance all of this while keeping her daughter safe from the maniac.

Reflection of Death – A man abandons his family to be with his mistress instead.  On their way out, they get into a horrific car accident.  He escapes the wreckage but finds that no one will help him get back home.  When he arrives back home, his wife is with another man and when he visits his mistress, she’s blinded and tells him that he died in the accident.  Is this a dream or a terrible new reality? 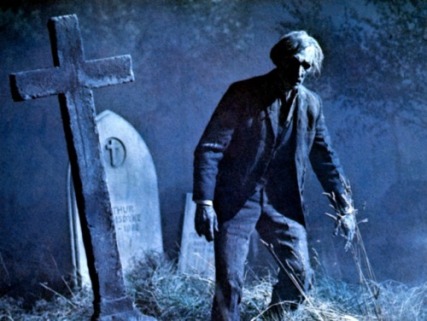 Poetic Justice – A snobby father and son go to extreme measures to get an elderly neighbour they hate to sell his property.  They push the neighbour too far after taking away his pets, his job, his friends and making him think the town hates him.  Heartbroken, the man takes his life but the rich snobs get their comeuppance from beyond the grave.

Wish You Were Here – A wealthy man is on the verge of bankruptcy and tells his wife they must sell everything to stay financially afloat.  She discovers one of his many treasures has an inscription written on it saying it will provide three wishes to its owner though the last line is unreadable.  She wishes for money and that starts a domino effect of wishes being twisted into making matters so much more worse.

Blind Alleys – The new director at a home for the blind drastically cuts the budget so that he can continue living his comfortable lifestyle but at the cost of making the poor old blind men suffer with terrible food, no heat and no medical attention.  When one of the men dies from the cold, the blind rally together to put the director through hell.

If you’ve watched the TV show (or even perused through the old comics) you’ll come to realize that the majority of the stories follow a similar plot of having a morally corrupt person going through a personal hell with a bit of an ironic twist thrown in for good measure.  All the stories in the film, except for “Wish You Were Here,” follow that prototype pretty closely.  That one story that doesn’t follow the mould is just a variation of “The Monkey’s Paw,” which is even referenced multiple times throughout the short.

Some shorts are better than others but there isn’t a bad one among the bunch and they all offer interesting stories and even a few jump scares.  The weakest entry, personally, is “Reflection of Death” but it’s hardly terrible, it’s just not as humorously morbid as the others.  The best short, “Poetic Justice,” is a great revenge story starring Peter Cushing as an elderly man whose house is a ghastly sight to the rich family across the street and they push him to the point of suicide.  You feel so bad for the poor man that you just root for their grisly comeuppance later on and the film doesn’t disappoint.

This was my first time watching the film and I was pleasantly surprised at how good it was.  I could point out that the acting can be a little campy at times, or the blood looks like paint but it fits in the context of being based off a comic.  The effects are quite tame by today’s standards though.  If that’s the worse thing I can say about the movie, it didn’t do much wrong in my eyes.  A classic that still stands the test of time.

Story: 8 – Plenty of morbid and macabre stories that entertain and still provide a few scares after all this time.

Blood: 3 – The effects are pretty tame compared to what can be done today, but there is some bloodshed, maybe the worst thing is a woman hacking her husband’s stomach showing off his guts.

Overall: 8 – While the effects don’t hold up well, the storytelling certainly does and you still get what you expect from a film called “Tales from the Crypt.”

-Stephen King and George A. Romero worked on remaking the film but instead made their own similar film, the awesome “Creepshow!”

-Genre icon, Peter Cushing, took a lower fee to be in the film and took the role of the poor old man in the “Poetic Justice” short.  The character in the film is a widower and Cushing had recently lost his wife so maybe that’s why he took it.

-Director Robert Zemeckis (Back to the Future, Who Framed Roger Rabbit) was such a fan that he watched the film every Halloween and went on to produce the HBO series and directed the pilot episode.

Tagged as: 1972, Amicus, British, Peter Cushing, Tales from the Crypt