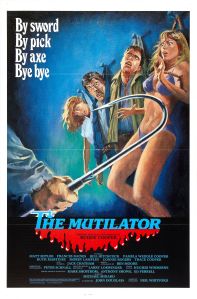 When he was a child, Ed Jr. shot his mother while cleaning his father’s gun.  His father, Ed Sr., is unable to forgive his son and years after the fact, in a drunken rage, invites Ed to a cottage where he plans to kill him and his friends.

It’s been a while since I’ve watched a slasher flick that was as straightforward as can be in the storytelling department like it was in “The Mutilator.”  Reading the synopsis pretty much tells you everything you need to know about the film.  The slasher era of the 80s provided so many similar films that some had to go to some extreme lengths to be able to differentiate themselves from the pack with absurd plot twists because it’s always a game to figure out who the killer is.  “The Mutilator” prefers to stick to a simple narrative and deliver its “extremes” in other areas.

The would-be victims in the film are a group of incredibly average and plainly dull characters.  It’s not that they’re unlikeable jerks, it’s just that they’re not very interesting to watch.  Most slashers have the usual standard tropes when it comes to the characterizations (the virgin, the joker, the asshole, etc.) just to have a variety of different people but everyone is pretty vanilla.  Even the “jerk” character isn’t really that bad of a guy.  They seem like a nice group of friends who want to party in a cottage but one of their dads is a soon-to-be mass murderer.

I’ll touch on Big Ed for a sec.  He gets about as much character development as any other personin the film, but all we really need to know is that he’s a hunter, he’s an alcoholic and a real jerk for wanting to kill his kid.  They’ve been estranged for years so it’s odd that he’s waited over ten years to kill his son but even putting the plan into motion he doesn’t seem totally committed to the deed.  Several times he’s seen passed out in the garage of the house and it’s only when he’s awakened that he gets up to kill people and it seems that these are the only scenes that look like they had real effort put into it. 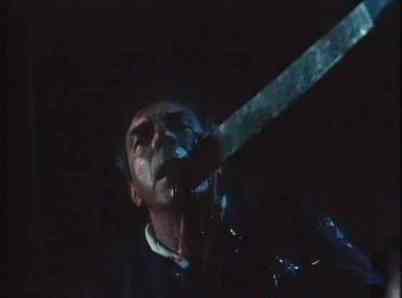 You know there’s something on your face?

Where the film really surprises is in the shocking ways that Big Ed finds to dispatch his son’s friends.  Everything else is plain and dull but the FX department had a blast.  A gruesome machete stab to the face with a decapitation to follow was neat, the boat motor was different and a girl gets a gigantic hook between the legs.  It’s a great collection of kills but it’s a shame that no other work was put into the film, “The Mutilator” unfortunately can only be recommended for the variety of violence on screen and easily not recommended because it might put you to sleep before anything good happens.

This is a pretty short write up compared to some of the other movies on the blog, but “The Mutilator” doesn’t provide much to write about.  Aside from the gore, which is enough for me to give the film a mild recommendation only for that reason, there’s very little excitement or tension or drama or anything else to get worked up over.

Story: 5 – It’s as simple as you can get, perfect for the types who like to shut their brain off to watch movies.

Overall: 5 – The only surprise here is how good the effects are, raising this dull movie up to a just passable recommendation for that reason alone.

-The film’s original title was “Fall Break” but was changed to the much catchier “The Mutilator” for marketing purposes.