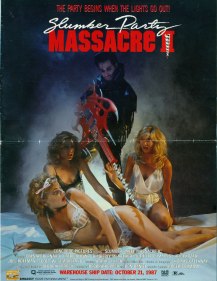 Courtney, the sister of one of the girls who survived the previous massacre, has been having nightmares due to the original incident and decides to get away from it all and relax with her rock group and boyfriend in tow.  Unfortunately, she dreams of a killer guitar player who shows up in real life to kill off her friends.

Wow…they, uh, went in a different direction with this one. The filmmakers really decided they needed more humour in their movie by means of a cackling dream demon who is totally original and not a copy of any potential other dream demons. The new driller killer in this sequel looks like a 50′s rock star who is capable of escaping Courtney’s dreams to kill those around her by means of a long power drill attached to his guitar!  Who is this guy and where did he come from?  If you’re looking for any explanation for this guy showing up, let the internet be your guide because you’ll get nothing.

The first film was a simple slasher flick with some goofy humour thrown in for good measure, that’s all it ever intended to be.  Yet here we have a supernatural element added to the movie that really should come with at least some sort of reason for this guy’s existence. The killer is certainly meant to be funny, he has his one-liners and he dances and sings as he kills, but it’s just too weird to laugh at or not funny to begin with. To add the list of hilarity are the many homages to the bigger and better slasher movies with many of this film’s characters named after Freddy, Jason, Wes Craven and even Norman Bates which might make you snort at best.

You may want to get…that…checked.

Other than the crazy rocker with the drill, the story is dull slasher fare. Most of the characters are just your typical slasher tropes and are acted as such. I can let the original slide on that but the only diversity in the cast is that they’re in a band.  Whee.  The gore is decent at best though I will give credit to some of the kills which are delivered in some interesting ways, particularly the dream sequences which contain the popular “head popping like a zit” scene. The nudity is unfortunately lacking, I don’t even remember if there was any or not which is a huge disappointment compared to the original. 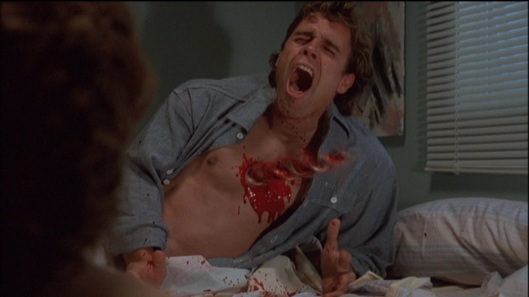 Somehow, the film as achieved some sort of cult status and is enjoyed for its campiness. I love camp as much as the next person, but only as long as it’s entertaining, and this movie (minus a few good scenes) is anything but entertaining to me. The rock and roll killer is the star of the show, but if you’re watching this to be scared you will be disappointed, and if you’re here to laugh, well, I bet you’ll be disappointed with that too.

Story: 3 – Interesting killer, everything else is boring.

Boobs: 1 – Maybe I saw something, maybe I blinked?

Blood: 4 – Some decent kills here and there, not as bloody as the original though.  Except for maybe that zit scene, bleh.

Overall: 2 – I’m not sure what the intended audience is for this film but I bet there have been a lot of disappointed people.  Stick with the original and pass on this party.

-Former “Playboy” Playmate Kimberly McArthur had it stipulated in her contract that she wouldn’t do any nudity.  What’s the point?

-The punk rock band The EverDead recorded an album entitled “Slumber Party Massacre II” which was inspired by this film. The cover art even portrays a drawing of the killer with a guitar drill as featured in the movie.