Well, let’s see here.  Girls want to have a slumber party…guys want to crash the party…oh, and once again someone with a power drill most definitely will be crashing the party.

Thankfully, this sequel tries to go back to what made the original so fun. It gets rid of the horrible “funny killer” aspects of the previous movie, as well as the supernatural elements. The movie is again as basic as can be but unfortunately this movie came out in 1990, long after the slasher craze died and becomes a prime example of why the genre almost completely disappeared because the formula at this point is beyond stale. 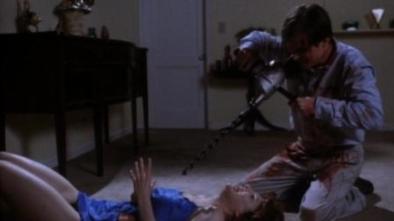 The film has all the slasher fundamentals covered, even bringing back the naked women that the last movie should’ve delivered on. The characters are very much as they always have been in the previous movies, just played by different actors (these being the worst of the bunch.) There are several red herrings that should draw your attention away from who may be the real killer, yet it’s incredibly obvious these guys are not the killer. Not that you wait very long for the real killer, he pops on screen from time to time to kill off not only the other characters but whatever tension the movie manages to muster.

Remind me to fire my manager.

Who knew showing who the killer is would lessen the tension?  Yes, the first film didn’t hide the killer either but at least he was alluded to early on in the film via radio news updates every now and then saying a killer escaped and we finally see him later into the movie when the tension begins to pick up and it worked out well.  This movie fails to keep any tension by making the viewer watch the killer do his thing while we yawn and wait for the movie to end.  I couldn’t imagine watching Friday the 13th Part Whatever and watch Jason walk around getting into place to kill someone.

So is there anything that’s good in it? Well, aside from the nudity, the killer branches out from just using the drill. A chainsaw gets used at one point and even a “For Sale” sign is used to impale one of the victims early on. I was slightly shocked at the script going so far as to actually have an explanation for the killer’s motives, but it’s weak at best. I guess that’s all the nice things I can say about this flick.

Story: 3 – It is what it is, but usually sequels try to be bigger and better than the previous movies, this one just tried to be like the first film.

Boobs: 4 – Not a smorgasbord like the first one, but a huge step up from the last movie.

Blood: 5 – Some drill kills are repeated (in fact, most of them are) but some of the other kills with different items aren’t bad either.

Overall: 3 – Certainly nothing to go out of your way to see…unless you bought the DVD series like I did and would freely admit to watching them.

-The beach scenes were filmed on a cold January morning.