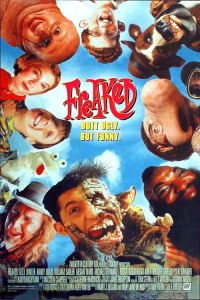 Washed up, former child actor Ricky Coogan (Winter) starts work as a spokesman for an evil corporation that makes a goopy substance they say is an agricultural miracle cure but has the horrible side effect of mutating anything it comes in contact with.  Coogan and friends run afoul of a proprietor of a back woods freak show who also makes his own freaks with the same substance.

The film opens with Ricky Coogan as a guest on a day time talk show recounting his amazing tale of being transformed into a garish creature.  Coogan, a former child star known for his role in the “Ghost Dude” films, is chosen to be the spokesman for E.E.S. —the Everything Except Shows corporation — and their lethally toxic fertilizer “Zygrot 24.”  He accepts a dump truck full of money to do it and goes to South America with his buddy Ernie (Blossom’s Anthony Russo!)  He is met by a group of protesters and cons Julie, one of the protestors, to come with them by telling her they’re environmentalists trying to stop Zygrot 24. 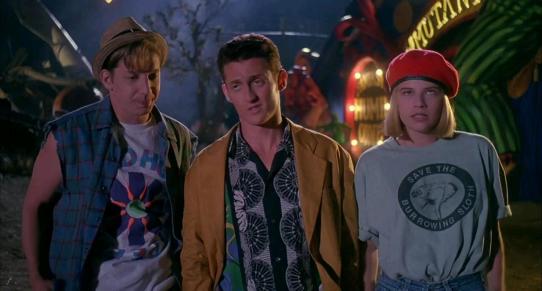 They pass by a local freak show and meet the sleazy operator, Elijah C. Skuggs (Quaid) who invites them to his shed for a private viewing but predictably trap them to experiment on them using Zygrot 24.  He turns Ernie and Julie into a two-headed mutant who fight like the Three Stooges.  Skuggs then turns his attention to Ricky who wasn’t very respectful to him and uses him as a pet project.  He throws them into their cage where they meet the other freaks including a human-sized worm, a man with a nose bigger than his head, Mr. T as a bearded woman, a sock head (voiced by Bobcat Goldthwait) and they are led by Ortiz, the dog boy (played by an uncredited Keanu Reeves, whoa!) 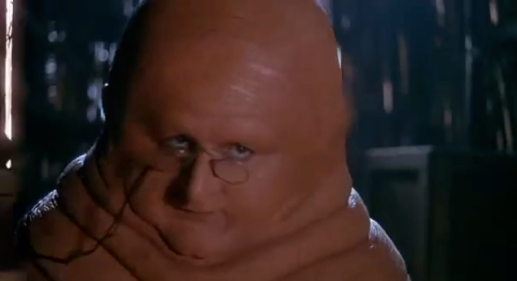 Dr. Jeffcoate as the human penis!

After struggling to adapt to being a mutant freak and shunning the others in favour of expecting a quick rescue, Ricky manages to convince everyone to follow him and fight back against Skuggs who plans on mutating Rick again and use him to kill the rest of the other mutants in one big show.

Whew, there’s so much going on in this movie, that’s just the base storyline.  The film surprisingly has a decent amount of story depth for the other mutants.  We come to understand who these poor, unfortunate souls were before they happened upon the freak show and become freaked by Skuggs.  Each story is good for some laughs but that’s hardly the beginning of the humour train. 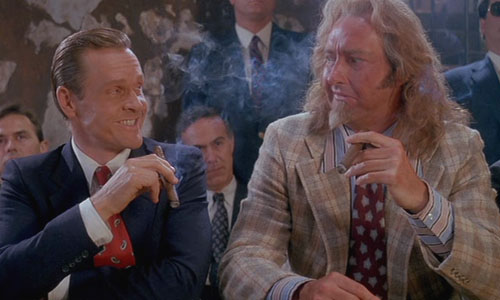 The entire movie is a manic production with a constant stream of running gags, scatalogical humour, sight gags, physical comedy and so on.  It’s a constant barrage of jokes that are more hits than misses to me but I was a fan of the odd sense of humour displayed (though there’s an awful lot of 90s pop culture references that some may not get.)  It’s not as funny to explain giant Rastafarian eyeballs named Eye and Eye who act as Skuggs’ security and live in a giant bust of Skuggs himself but I couldn’t help but blurt out in laughter upon seeing them while they speak their Jamaican gibberish. 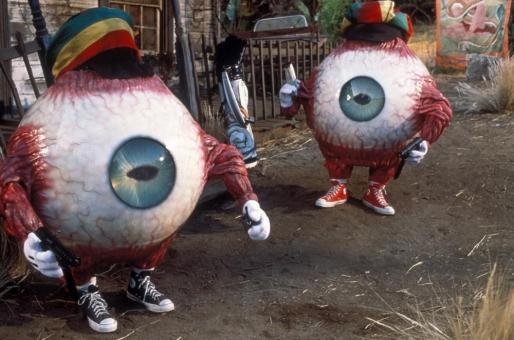 Lo and behold either a nightmare come to life or a stoner’s idea of a good laugh.

All the actors do a fantastic job at playing their parts.  Randy Quaid seems right at home playing the scenery-chewing Skuggs who is almost as evil as William Sadler as the slimy head of the evil EES Corporation.  Alex Winter had to deal with a lot of prosthetics and I think most of his dialogue is post-production but the former half of Wyld Stallyns does well enough as the half monster-half douchebag Ricky Coogan. 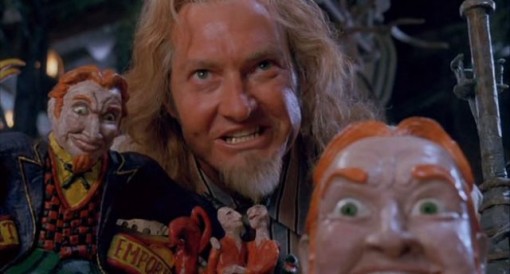 In fact, there are a lot of prosthetics and effects in this film.  There’s a diverse range of freak characters created using different types of make up, prosthetics, body suits and animatronics.  They may not be perfect in these CGI days but they’re still pretty good for it’s time.  The film isn’t terribly bloody but the few times it wants to, there’s no holding back. 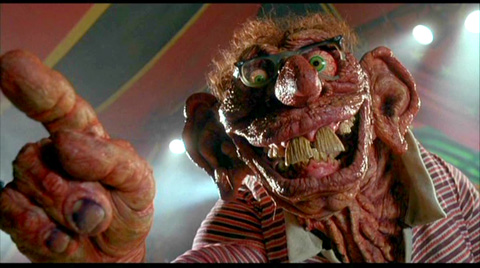 This ain’t no Sesame Street.

I can safely say this isn’t for everyone.  Just the pop references alone may go over younger viewers’ heads, but the whole movie is just bonkers from beginning to end, you’ll know within ten minutes if you’re going to like it or not, but I loved Freaked.  And that’s all that matters.

Story: 8 – Certainly one of a kind and loaded with off the wall humour.

Blood: 6 – The movie relies on the hideous and gross effects more often than anything bloody violent, however, a guy does get his head ripped off and smashed into a bloody mess on the floor.

Nudity: 0 – Though the worm only wears a hat…

Overall: 8 – Bizarre and gross, weird and hilarious.  It’s a cult classic which usually means you’ll love it or hate it.

-The movie was intended to be a full on theatrical release but the head of the studio was fired and the new boss hated the movie.  The post production budget was cut and the film was only released in two theatres before being thrown onto video shelves to eventually find an audience.

-The film’s title was originally “Hideous Mutant Freekz” but was changed to “Freaked” before release.

-“Freaked” was originally visioned as an ultra-violent horror film but was re-written as a PG-13 comedy to tone it down.

-I made it through the whole thing without mentioned Bill & Ted…sorta!