Following a nuclear war that eradicates a large majority of the male population and renders almost everyone sterile, a now female-led US Army captures Sam Hell, one of the last virile men on the planet, and intend on using him to break out a group of fertile virgins who are held captive in a town of mutated frogs.

The film starts a decade after two nations decided to bomb each other with nuclear weapons thinking it wouldn’t be as bad as scientists made it out to be.  The war and blast took its toll on the male population so women have taken over many places of power, especially in the Army.  The population has declined immensely due to the fallout creating widespread sterilization in both men and women.  The fallout also has another side effect by creating mutants in the form of giant frogs who are restricted to reservations (think District 9.) 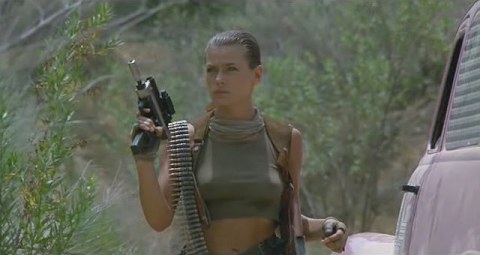 There is a division called Med Tech which is tasked in ensuring that the population doesn’t go down any further and happen upon a prisoner named Sam Hell (Piper) who has left a path of pregnancies in his stead.  They sign him up for service in an attempt to rescue a group of fertile virgin women who were kidnapped by Commander Toty to be a part of his harem on the reservation. 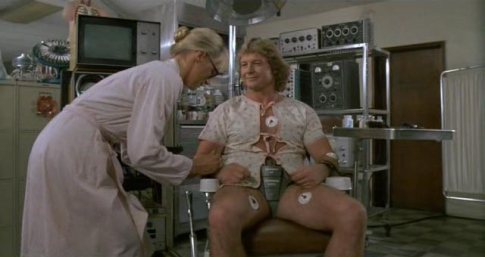 Despite his reluctance to help out, Hell’s wedding tackle is fitted with a giant electric codpiece that ensures he does what he’s told by shocking his wee-wee if he gets too far away from the leader of the mission, Spangle (Bergman.) If he gets too far away, then boom!  Needless to say, they argue all the time until they eventually fall in love like everyone does in the movies.

The first half of the film is full of a lot of intentional and unintentional comedy.  Not that I’m making fun of a possible feminist army of the future, but the movie was clearly written by someone without a uterus.  Pink army vehicles?  Check.  Frilly camouflage bra and panties?  Check.  And giggidy.  Sam and Spangle bicker about his junk belonging to the government.  Spangle’s lame attempts at seducing Sam always fail and yet every other woman (or She-Frog) who meets him instantly want to do him.  No wonder Roddy wanted to do this movie. 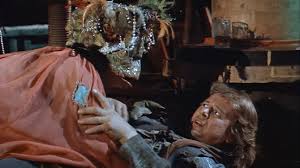 We are NOT re-enacting Planet of the Apes!!

Oh wait, there are mutants in this movie!  Once Spangle and Sam infiltrate Frogtown under the guise of Sam selling her as a slave to Toty, we finally get to see what those frogs look like and it’s a mixed bag.  A few of the main frog characters have decent animatronic puppet heads but the rest are relegated to masks that look great until you realize they’re talking while their mouths don’t move.

The mutants aren’t that big of a threat in the end and the film wraps up in a nice little package and a very happy ending for Sam.  Is the movie bad?  There’s no denying that, but the film does provide several laughs and cheap thrills throughout to entertain in that so-bad-it’s-good way.  It’s a surprisingly decent distraction for an hour and a half.  There’s enough to laugh at all the way through and hey, boobs are always a nice touch.

Story: 5 – A low rent Mad Max clone with mutant frogs that is mostly about a guy’s junk being able to save the world.  I think.

Nudity: 6 – Sandahl Bergman dances several times in her underwear while Cec Verrell has a few topless scenes and even clothed stole my attention whenever she was on screen with her quiet sexiness.

Overall: 5 –  It’s not exactly a title that screams out “must see” but for any fan of Roddy Piper, this is one of his better films.

-Sandahl Bergman refused to do any nudity in the film.

-The actress who played the female frog had to endure three hours of make up application.

-There are TWO sequels to this!  Return to Frogtown stars the late Robert Z’Dar in the role of Sam Hell as a direct sequel while Max Hell Frog Warrior is more of a martial arts film of sorts.

-Rory Calhoun does a lot more than standing and walking. 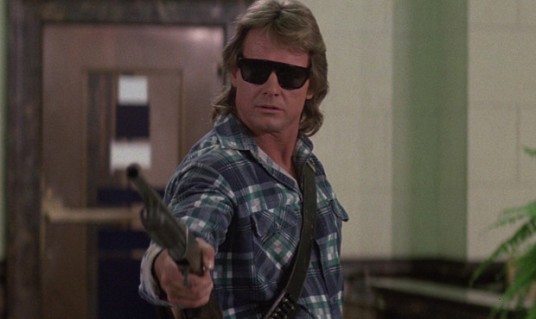 Categories: Review, So Bad it's Good!