A trio of astronauts on a voyage to Saturn are bombarded with cosmic rays (maybe?) which kill two of them but leaves one alive.  He somehow returns home but the radiation messes with his DNA and causes his body to melt and lose his mind so why not go on a killing spree?

The small crew of a spacecraft orbiting around Saturn (!) go into the rings and somehow through what I can only imagine is a solar flare that travels faster than light, all the men on the ship are killed somehow except for the captain, Steve West.  The film then fast forwards to a doctor looking over Steve wondering how he survived.  How long does it take to get to Saturn and back, a weekend?  Is this Star Trek?  It should take years to get back from Saturn shouldn’t it?  Once the doctor leaves, Steve wakes up, sees himself burnt to a crisp and falling apart, so he decides to kill the nurse and escape the hospital and goes on a random skilling spree. 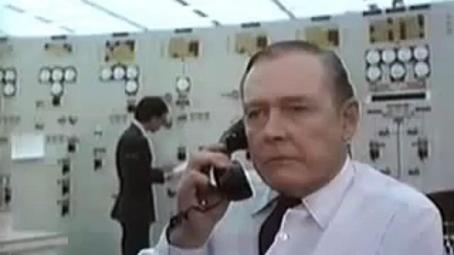 Look, kids, that’s what a computer looked like 40 years ago.

Realizing that a radioactive monster is on the loose, a military general orders Dr. Ted Nelson, one of the few to find and return Steve before things get worse.  Ted’s ticked that he’s made responsible to find Radioactive Steve but no one else is supposed to know and tells his wife not to tell anyone.  Meanwhile, Steve is still on the loose and starting to melt away, even leaving parts of himself behind.  Ted uses a geiger counter to follow the radiation but it’s not long before he can follow a trail of body parts to find Steve, who has murdered a poor fisherman (whose head is awkwardly focused on a lot after it’s thrown into a lake…yes, it was weird.)  The General himself shows up later on to help with the search but they just can’t find this soggy, zombie-like creature who is also a master ninja that can get the drop on anyone that gets in his way, eating their flesh to regenerate his own.

“Shh, quiet, this is gonna be real scary.”

In all honesty, a lot of the hype was for the effects which were done by Rick Baker who has had a “decent” career working on such films as Star Wars, Ed Wood and Men in Black.  The bulk of the effects are, of course, for Steve, our unbelievable dripping person, and they are suitably gooey and gross most of the time.  It’s disappointing that the majority of the creature attacks are done off screen and little to nothing is shown after the fact.  Aside from the wacky floating head mentioned earlier, you see a couple of chewed up body parts lying on the ground.  Steve does get to munch on someone’s face later on so there’s that. 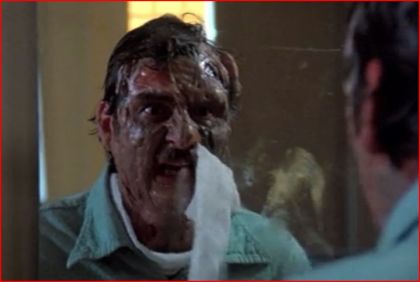 At least he got that booger sticking out of his nose.

While it was originally meant to be serious, the film is basically looked upon as a parody of matinee creature films and should be treated as such.  Some of the effects can still be appreciated but the film is almost a perfect storm of bad filmmaking.  Which is why it was kind of fun to watch in that I couldn’t wait to see how bad the film could get.  There’s an awful lot of bad effects and dialogue but some of the situations that come up are as puzzling as they are laughable — I think my favorite scene was with the elderly couple who stopped by an orchard to steal lemons only to happen upon the creature stumbling in the dark and just had to kill them.  What are the odds?

Damn it feels good to be a gangsta.

If you watch the promotional material for this flick, it’s being pushed as the next big horror monster as though it’s comparing itself to the likes of Dracula, Wolfman and Frankenstein, which is even referenced halfway through the film just to hammer that fact through our skulls.  And it’s not just any Melting Man, it’s the INCREDIBLE Melting Man!  I would imagine that’s an awful lot of hype and expectations to put on a horror film in 1977 but it’s actually so bad it has it’s own episode on MST3K which of course rips into every aspect of the film from the hilarious acting, terrible script, far out killing situations and amateur direction.  But hey, those effects aren’t too bad.  Sometimes.

Story: 4 – Cosmic rays transform one man into the Fantastic Puddle of Goo who must consume human cells to regenerate.

Blood: 4 – Nice gooey effects at times but everything else falls short.

Nudity: 6 – Cheryl “Rainbeaux” Smith gets topless for a bit.

Overall: 4 – It’s good for some laughs but you probably won’t be clamouring for a second helping of THE INCREDIBLE MELTING MAAAAAAN!

-The film was shot in two weeks.

-Rick Baker made several gruesome pieces for the Melting Man costume that actor Alex Rebar refused to wear.  Rebar also had to endure constant applications of a sticky, dripping substance throughout the shoot and would wind up peeling his costume off at the end of the day.

-The German release of the film was titled Best Regards from Planet Saturn.