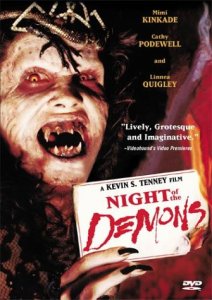 When a group of teens decide to party it up on Halloween night in a dilapidated mortuary, they get more scares than they bargained for when they learn the hard way that demons have possessed the building and looking to occupy their bodies next.

Angela is having a party.  Jason and Freddy are too scared to come… But you’ll have a hell of a time!

It’s Halloween night, which makes it a perfect time for people to dress up and party!  A group of high school students are invited to a Halloween party by Angela, the weird goth chick that everyone usually avoids.  The party is to be held at Hull House, a mortuary shut down many years ago making it a safe place to have fun right?  When dancing and drinking isn’t enough to satisfy, Angela suggests a seance which of course wakes up the demons who live in the walls of the building and look to possess the temporary occupants because what demon doesn’t want to possess a body instead?  The slutty chick gets picked on first and she passes it on to Angela who becomes the ringleader and one by one the kids get knocked off in nasty ways only to come back after the rest of the living.

While the film’s story is basically any other “teens trapped in a building” horror movie, of which there are several, it’s more akin to Evil Dead with the demonic possession aspect.  The film isn’t entirely original, I get that, but what it really comes down to is whether the filmmakers can put their own spin on the subject matter and make it their own.  Happily, Night of the Demons does just enough to separate it from similar titles and is a great Halloween flick to have in the background of your party. 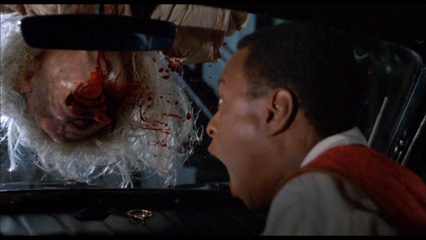 The filmmakers were sure to pack the movie with a good amount of gore as well as T&A.  What film starring Linnea Quigley doesn’t have her fully naked in it?  Jill Terashita goes topless and Amelia Kincade shows off her rear end.  Gore-wise the film features popped eyeballs, a bit off tongue, an arm separated from a guy’s body, razor blades slicing through someone’s throat, and let’s not forget the infamous lipstick scene.  Not too shabby. 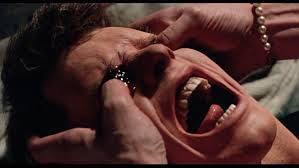 There’s not much more to say.  The film is what it is, an 80s flick where kids party somewhere they shouldn’t and play with forces they shouldn’t and pay the price and the numbers dwindle down to whoever the hero winds up being.  Original?  Nah.  Fun?  Of course.

Story: 5 – Teens get killed by demons they conjured up in an old mortuary.

Blood: 6 – Not quite as bad as it was probably considered back then, still far from terrible.

Nudity: 8 – Linnea Quigley leads the nudie parade but most of the girls put on a decent show.

Overall: 7 – A fun flick that gets you into the Halloween mood.

-Linnea Quigley met her future husband when he was moulding her breasts for the lipstick scene.