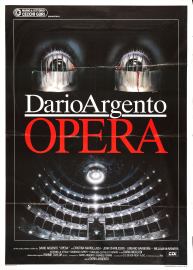 A young opera star gets the chance of a lifetime when she’s given her first lead role but becomes the target of a jealous stalker who will kill anyone who gets close to her to have her all to himself.

Terror at the opera!

When an opera diva gets hit by a car in a hissy fit befitting of a diva, her understudy, Betty (Cristina) is moved up to be the star of MacBeth.  Betty is wary of taking on the role due to her superstitious belief that the play itself is cursed but everyone assures her she will be fine.  She knocks it out of the park and wows the audience, including one disturbed individual who has taken a fancy to the new star and is more than willing to kill to get close to her.

The killer begins to play dangerous games with Betty as he leaves a trail of bodies.  Any time he makes a kill, he ties Betty up and makes her watch him by taping needles underneath her eyelids.  If she tries to close her eyes, she’ll tear her eyelids off so she has no other choice than to watch the killer sadistically mutilate his victims, from the bitchy costume designer to Betty’s agent to a young actor who is tries to get intimate with her.  He reveals information leading Betty to believe that this guy was involved in the death of her mother, another noted singer who was killed by a stalker.

Just a one-eyed man and his bird. Nothing to see here.

In true Dario Argento/giallo fashion, the kills are indeed brutal to watch as they are not only violent but filmed with the killer’s point of view.  Near the beginning, a man gets the back of his head repeatedly punctured on a coat peg.  A woman gets shot through the eye when peeping through a door’s peep hole, an actor gets a blade shoved through his jaw and protruding through his mouth.  One guy even gets his eye pecked out after pissing off some ravens.  The film is graphic and gory, just the way Argento fans like it.

Know what I hate? That metallic taste you get in your throat.

Opera isn’t perfect, however, there are a lot of little nagging issues throughout, especially with the script.  You’d think with so many murders happening in the theatre that the play would get shut down, right?  The whole deal with the ravens featured in the play holding a grudge against the killer for killing one of their own and working it into his comeuppance is silly. Not to mention that the film almost ends ambiguously until the final scene is shown and feels tacked on to have a better ending.  These odd circumstances don’t completely ruin the film but they did take me out of the movie a bit and unfortunately it doesn’t live up to Argento’s earlier genre-defining films like Suspiria and Deep Red.

Story: 6 – Jealous stalker takes out anyone in his way to get to his lovely opera singer.

Blood: 8 – Violent, bloody and mean, these are the moments you’ll remember after the credits roll.

Nudity: 4 – A brief scene with a nude woman lying in bed.

Overall: 6 – There are some issues that prevent Opera from being one of Argento’s better outings but it’s still pretty watchable.

-Argento notes that actress Cristina Marsillach was the most difficult actress he had ever worked with.

-Though they ended their relationship two years prior, Argento convinced his former lover Daria Nicolodi (mother of Asia Argento) to come back to be in this movie in a small role.

-The film started with using 140 crows but in the end only 60 remained as the rest escaped the theatre set.