Mike Strauber catches his wife Sharon in bed with his best friend Jerry. He gets mad and takes off to embark on an adventure of murder and self-mutilation in demented games of truth or dare. 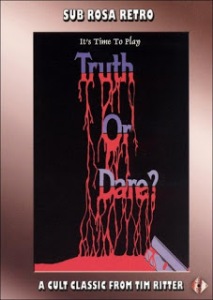 -Pretty simple cover, huh?  I’m guessing the movie is going to be bloody.  In fact, that’s pretty much what is being advertising on this cover.  Either that or I’m watching the shittiest game of Truth or Dare ever.

-Who plays Truth or Dare anymore?  Unless it’s Strip Truth or Dare.  Which I may have just made up but to make my point, who would play either of those?

If you can’t laugh at dead babies, what can you laugh at?

Mike Strauber is a well-to-do yuppie who comes home early one day to find the love of his life in bed with a man who isn’t him.  Twisting the knife a bit more, his girlfriend says she’s ready to move on to a new life so Mike takes off in a fit of rage to live in the woods.

Through a series of flashbacks detailing his constant need to impress the love of his life only for her to turn into a cheating trophy wife, Mike loses his marbles.  During one particularly psychotic episode, he plays a game of “Truth or Dare” with a mysterious woman he picked up who eventually dares him to mutilate himself, including cutting off his finger and ripping out his tongue and it could’ve gotten worse if a park ranger hadn’t found him. 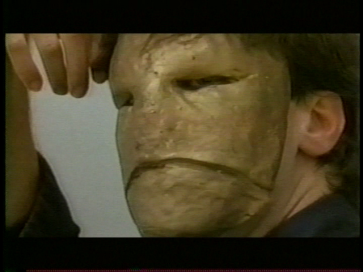 It’s not that stupid looking….is it?

After a few stints in the asylum, he goes full blown insane and murders his way out of the asylum and out into the world to hunt down the woman who broke his heart and will kill anyone, with anything, if they get in his path of destruction.  As he hunts down his wife, the police are on his trail as Mike leaves a disgusting trail of bodies in his wake. 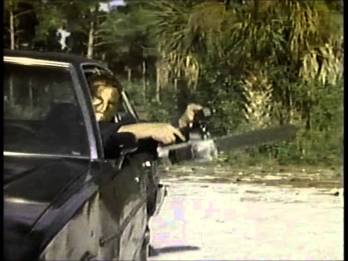 It’s not very often that a movie makes me say “Wow” as many times as I did during Truth or Dare, though it wasn’t always for the right reasons.  Or maybe they were the right reasons; maybe the movie was driving to be this awful.  Assuredly, I’ve seen more recent, more shocking films in comparison to their violence, but for 1986 the film more certainly earns its notoriety at the time.  But the movies I’ve seen more recently also have a coherent storyline.  By design or not, Truth or Dare is anything but coherent and some of those “Wows” were due to my mind trying to figure out one scenario to the next once Mike permanently boards the crazy train.  How crazy is he?  He kills the imaginary people in his head.

I dare you to put this grenade in your mouth and finish the movie.

So the movie sucks, there’s nothing to enjoy, right? Ehhhhh…y’know, there were some funny scenes that I had good laughs at.  Again, maybe not for the right reasons, but the movie must know it’s a comedy.  As Mike’s brain turns to mush and he spirals out of reason (amid several asylum stints!) his murder sprees are so wrong yet so funny to watch.  Normally my first reaction to seeing someone drive into a baby carriage is to be horrified, which I was, but this movie had a way of making me laugh right afterwards.  If you can’t laugh at dead babies, what can you laugh at?

Hmm?  Oh that’s not considered funny?  Then perhaps this film is not for you, sir/madam/child.

Story: 3 – The basic idea of the story is fine, I suppose, it’s just I don’t why it was chopped up into such a mess.  It tries to juggle shifts in tone as it starts as a revenge thriller but by the end it’s a silly slasher flick complete with masked killer!

Blood: 8 – While it’s not very often I can say a film shocked me into fits of laughter, that’s what this film did.  Mike rampages through his victims in various ways from a pencil right in the eyeball to hanging out a car window to chainsaw a teenager in the strangest drive-by killing on film, this is what you’re watching the film for.  Sicko.

Nudity: 7 – Sorry Mike, but your girlfriend is hot.

Overall: 5 – Overall, Truth or Dare has a lot of laughs for better or worse but to take this movie seriously would be a huge mistake.

-I’m shocked to learn the film has several sequels!