A small American town is visited by an alien parasite that takes over the body of a local with intentions of expanding globally in a hurry.

-From the guy who brought us Dawn of the Dead??  George Romer….ooooh.  It’s James Gunn’s version of Dawn they’re talking about.  But that’s okay, because that was great!

A little town in South Carolina is celebrating the big annual deer hunt when a meteorite carrying a passenger lands outside of town.  Over-protective husband Grant (Rooker) picks up Starla (Banks) from her teaching position while the town sheriff Bill (Fillion) and his team watch on because there’s nothing else to do.  Later in the evening, Starla rejects Grant in bed and he goes out to cool off at a watering hole.

At the bar, Grant is greeted by Brenda, an admirer of his in the past, and they walk out into the woods where he brushes her off at the last moment while thinking of his dear Starla.  He sees an unusual creature on the ground and decides to poke it with a stick, Grant’s a dick after all.  The alien creature shoots a part of itself onto Grant’s chest and it burrows deeps inside, taking over his mind and body as he passes out.  Upon waking up, he’s on a meat hunt and intends to feed his lovely wife who wakes up and decides to make up for last night’s mishap.

The parasite, being a parasite after all, degrades Grant’s body and he begins to slowly turn into something gruesome though it’s very gradual.  When sheriff Bill and his crew show up to talk to Grant after Brenda is deemed missing, Grant takes off for the woods.  Bill and the team, and some fellow good samaritans, chase Grant who is now sporting a rubbery, yet lethal, arm.  When they come upon a barn, they find Brenda inside though she’s gigantic after being fed so much and she’s about to burst!  Hundreds of alien slugs burst from her body and force themselves down the throats of everyone aside from Bill and Starla.

The corpses reanimate, much like Grant did, though the bodies now share a collective mind — like the Borg — though it’s the mind of Grant they share, which is one of the funniest parts of the movie to me.  They all talk like Grant, they all pine for Starla and they all especially hate Bill.  The rest of the slugs slither into town and take over the bodies of every man, woman and child they find except for the one teenage girl who can fight back.  She joins up with the survivors providing the last stand between saving the planet or letting it become slug food.

If you look into James Gunn’s humble beginnings in filmmaking, you’ll notice that he started out with Troma studios; if you’re familiar with Troma then you can definitely see quite a bit of Troma influences in Slither, a gross-out horror/comedy which a strong emphasis on being gross.  The film has a damn fine cast who are totally on board with what the film wants to deliver and from the looks of things, the effects team had a time making the film as over-the-top gruesome the budget would allow — though I’m not sure how Mr. Rooker liked being in all sorts of disgusting prosthetics. 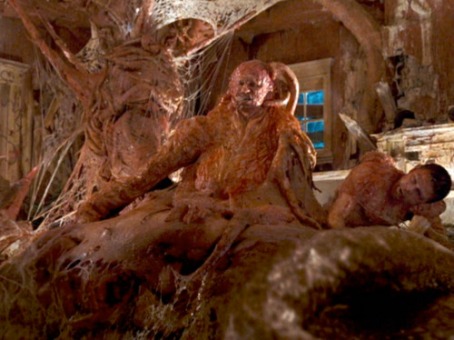 Slither is also notable in being somewhat similar to the classic 1986 film, Night of the Creeps. I know some people can be argumentative about Slither being a rip-off but I find there are enough differences between the two and I like Creeps enough that had this been released as a remake of some sort, I think I would’ve been happy with it.  The movie may be too gruesome for some to stomach, but those pussies aside, the film is gory, scary and most of all, fun to watch!

Story: 8 – It’s a familiar story involving aliens parasites wanting to take over the planet but it’s done in such a fun way that it separates itself from others you would think are similar.

Blood: 9 – Gorehounds will have lots of fun with blown up heads, guts spilling out of one dude who is split in half and poor poor gigantic Brenda blowing up like an overstuffed Pizza Pop.

Overall: 8 – The easily grossed out need not apply but they’re missing out

-Troma co-creator and spokeshead Lloyd Kaufman has a brief cameo in the sheriff’s station playing a sad drunk.

-Those keen to look out for little easter eggs will find references to several movies and filmmakers, such as director Frank Henenlotter’s last name appearing on a banner early on in the film.