Blinded before being executed for their unholy acts, undead Templar Knights are awakened in present time and return to their killing ways though they must hunt by sound.  Can our heroes tiptoe their way to survival?

Judging A Book by its Cover 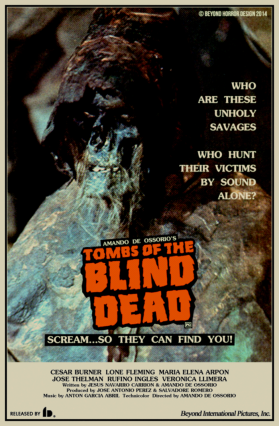 -Just a close up shot from a movie still?  Really?  Not much effort put into this poster.  What shall I talk about now, the font?

Scream…so they can find you!

Centuries ago, there was once an unholy group known as the Templars, who sacrificed virgins and drank their blood believing the act to give them eternal life.  The Templars are eventually stopped and are hung at the gallows where nearby birds peck their eyes out.  Do you see where this is going?  Fast forward six-ish centuries to present day cough1972cough Portugal and the bodies are awakened by a woman who has run off a train and stumbled upon their now dilapidated church. 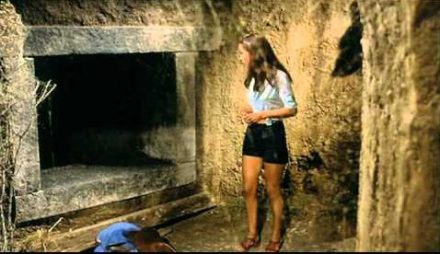 The undead knights go back to their killing ways upon awakening along with a case of bad breath and the lack of sight.  Thanks to those damn crows that blinded them, they must hunt by sound — of which the woman makes plenty —  and mount their undead steeds in order to dispatch her.  They went all out for that!  Her friends eventually come looking for her the next day and thanks to a train, the knights get a lift to town to continue their rampage before those credits roll. 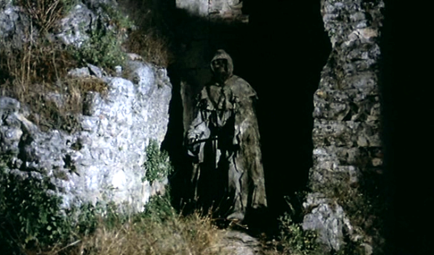 Uh oh, I think they spotted us. I can smell it.

So what’s to say about the knights?  Well first off, the director would like you to know they’re mummies or vampires, not zombies, though they act somewhat similar so let’s lump them into the “slow-moving zombie” category and be done with that because that’s what you get.  The knights can be scary but only up to a point and the multitude of daylight scenes does them no favours.  By low budget standards of the time, I think they look just fine, especially with the spooky music that accompany their slow-moving attacks.  If you can’t put yourself in the movie and balk at the knight effects, however, then time has not been kind to Blind Dead so you might as well balk at the whole film series because there are four of these suckers. 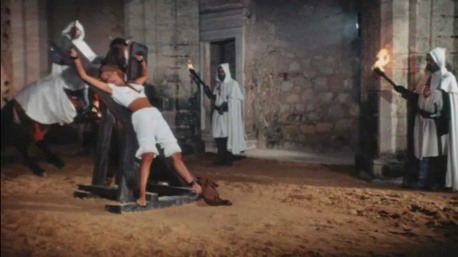 What a lovely tea party.

Tombs of the Blind Dead can only be a recommendation for those who love their slow-moving ghouls in the wake of the success of Night of the Living Dead and want to see a Spanish take on it.  The blind gimmick is very interesting and makes for a different atmosphere where dire situations ask the protagonists to figure out how to survive and it’s by being quiet, not losing your shit as soon as you see an undead Templar knight looking to feast on your blood.  I mean, honestly.

Story: 5 – There’s not much to the story itself, it’s how different the undead are from the other movies like it.  Admittedly, the ghouls have a backstory so that alone makes them more interesting than most deadites.

Blood: 6 – Lots of bites, slashing and stabbing that all have various about of bloodshed shown.

Nudity: 4 – Some boobs are seen although not always in the best scenarios.

Overall: 6 – As most European zombie films tend to be, it’s a slow crawl to the finish though I did like knight attack scenes and felt they were at least a little scary.  Maybe this should get a remake, it’s something different.

-The English language versions call the knights “Templars” though the original Spanish version call them warriors from the Orient.

-There is an alternate opening of the film when it was released as Revenge from Planet Ape that makes very tenuous ties to Planet of the Apes.