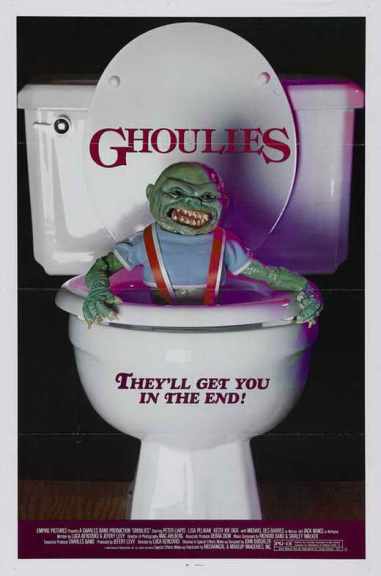 -Now this is a classy cover right here, folks.  Class all the way.

-Were Gremlins not available?

-Fun fact: This scene wasn’t in the original film, instead it was added later because everyone wants to see this, right?

They’ll get you in the end.

The film begins in the basement of a funky mansion where it seems a Satanic cult, led by master Malcolm Graves, has gathered to do their usual Friday night business.  Graves beckons his wife bring their son to him so that he may sacrifice their baby to Lucifer.  The mother is taken aback by the demand and places a protective talisman on her son which prevents Graves from touching the child.  Graves instead chooses to sacrifice his wife’s life and casts the child away with one of the disciples who also winds up being part-time narrator throughout the film.

Welcome to the rock video set!

Fast forward a few decades and Jonathan Graves, along with his girlfriend Rebecca, shows up to the mansion as it was inherited to him following his father’s death.  They look around the place and Jonathan descends into the basement where all the fun stuff happened many years ago.  He opens a few boxes, finding his father’s Satanic robes and books.  Instead of being put off by such things, Jonathan instead is drawn to it and an evil force slowly takes hold of him.

Are we supposed to be afraid or laugh at them?

Rebecca can’t wait to Unable to agree on what to do at said party, Jonathan invites Rebecca and friends to the basement to do a ritual because those always lead to fun times.  Initially nothing happens and everyone goes back upstairs unaware that a little creature — perhaps a Ghoulie? — has manifested because of the ritual.  It’s just slow, okay?

The next day, Rebecca figures he should just sell the mansion and go on with his college education; Jonathan puts that plan to the side as he wants to spruce it up a bit and maybe do something with it.  While Rebecca is in town, he begins to clean up the house and redoes the basement with his father’s book in tow for that special “Satan-worshipping” look that Jonathan is looking for.  The evil force starts taking a stronger grip on him as Rebecca worries about him while he slowly tries to push her away.  Also, he conjures more little creatures so he’s just really looking out for her.

Are we the ghoulies?

This is where I would think the movie really starts; when the Ghoulies show up then shit’s going down.  Instead, Jonathan conjures up a pair of medieval little people, Grizzel and Greedigut, to help him achieve the knowledge and power he desires.  (Excuse me, the knowledge…..AND POWER!!!)  Jonathan needs to do one more ritual with a certain amount of people and he has just enough friends to pull it off.  It’s time for another party but instead of getting what he wanted, Jonathan is instead forced to fight his undead father who seeks to finish what he started all those years ago.

The “Ghoulies” in question are more window dressing than anything and that’s a little disappointing.  Being hand puppets, I understand their limitations, and they do have the briefest of moments for a laugh or two, but have little to do in the film other than hang around making ugly sounds.  Grizzel and Greedigut seem to be from a different movie and don’t belong here although I’ll admit they actually do more story-wise than the titular creatures.  Sad!

Story: 4 – A college student inherits a mansion and discovers his father’s Satanic past and dabbles in the dark arts bringing about tiny, ugly creatures to serve him and hang around.

Blood: 3 – The film isn’t that bloody, the worst you’ll see are some bloody bite marks on dead bodies.

Overall: 4 – I can pick out some good moments that I liked but they were few and far between and rarely involved any Ghoulies.

-Jeffrey Combs auditioned for the role of Jonathan Graves.

-There are times during the film where characters are wearing sunglasses.  The film was intended to be filmed in 3D and the glasses were a hint to viewers to put their glasses on.  They stopped filming after two days due to the complexity of 3D at the time.

-The poster for the film featuring a Ghoulie popping out of a toilet reportedly cause several angry mothers to write letters to the studio saying that their kids were too scared to use the bathroom after seeing the poster.