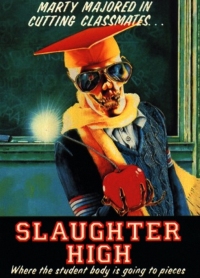 Eight people are invited to their 10-year high school reunion but quickly learn they were tricked to attend by a former student they had a hand in disfiguring during a prank gone wrong.  It’s the revenge of a nerd!

The school nerd, Marty Rantzen (Simon Scuddamore) is tricked into getting into the showers with school hottie, Carol (Caroline Munro.)  After he takes his clothes off, a group of students gather around to taunt him and his puny pecker before dunking his head in the toilets.  Just another day in high school!  They get caught by a teacher and figure they’ll get their revenge on Marty by sabotaging a science project to explode in his face.  It goes off even better than expected when a jar of acid breaks and splashes Marty in the face, leaving him horribly disfigured.

Flash forward ten years, everyone’s gone on to have mostly successful lives and decide to accept invitations to a high school reunion at the old school.  They arrive and the place is a dump, hasn’t been open in years, yet there’s a decent spread and someone took the time to put up signs.  Gotta be legit.  However it doesn’t take long for a killer to show up wearing a jester’s outfit and make a mess of the place, and the former students.  He offs them in pretty brutal fashion too, though he treats them like they treated him.  Locked in with no escape, the group’s numbers start to dwindle all the while figuring out by process of elimination who is doing this to them. 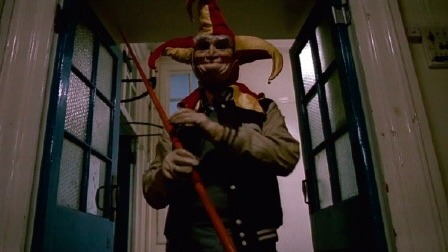 Just a man who enjoys his work.

The setup is strictly from the big book of slasher movies, just switching up the ways people get killed.  The victims are nice and stupid, yet some of them are totally deserving of what happens to them.  Looking to up the ante from the norm, the filmmakers put an unusual amount of acid kills in the movie. From drinking it to bathing in it.  It’s a little out there and I’m pretty sure if I got hit by acid in a shower I’d jump out before I melt into a skeleton, but that’s the reason I’m watching the movie, I guess. 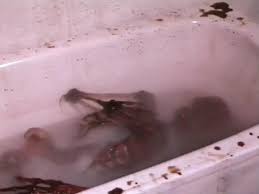 It was that gross BEFORE she got into the tub.  Also, who uses an old tub at an abandoned school?

The cast does what they can but they’re made to look like morons.  They practically have to break into the school to get to their reunion, you’d think something was up right away.  And so few people decided to show up.  They really could’ve avoided acid baths if they decided to go to a bar instead.  Not much of a movie if they go that route though.

If you’re willing to shut your brain off for ninety minutes, you’ll be in for an entertaining horror flick trying to set itself apart from the very large pack.  New horror movies were popping up more frequently during this time so filmmakers had to find ways to separate themselves from being the same old junk.  It’s not a total success, but it gets a passing grade.  School pun!

Gore: 8 – The above acid bath, a stomach blown up, an electrocution, a few impalements through various body parts and a few surprises for later.  Easily the highlight of the film.

Nudity: 6 – A few topless scenes for the men and a full frontal for the ladies if you like your guys teeny tiny.

Overall: 6 – A nice slice of 80’s cheese to enjoy and forget about later.

Originally titled “April Fool’s Day,” the film’s title was changed to Slaughter High to avoid confusion with Paramount’s film of the same name coming out that same year.

Star, and hot scream queen Caroline Munro, was actually 36 years old in the film though she was playing a teenager for part of it.

Star Simon Scuddamore, who played the villain Marty, died of an intentional drug overdose shortly after the film was released.