An African-American med student is murdered by a racist cop but his soul is transferred into a statue of a tribal warrior in order to get his revenge on his killers and racists everywhere. 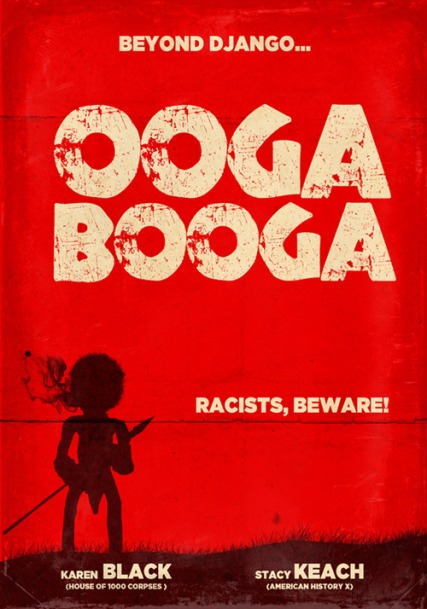 -A killer doll movie that takes a hardline on racism?  I don’t know how that’ll work out but making a comparison to Django Unleashed must mean I’ll be hearing the n-word a lot.

-Is that…is that the doll’s penis?

-Karen Black and Stacy Keach must need to pay the rent.

The film begins with a children’s television host, Hambo, not appearing on set because he’s a sleazebag drunk, jacking off in his dressing room.  He is ultimately fired and later in a drunken state, calls his friend Devin over to cheer him up.  Devin brushes off his girlfriend to get to his friend in need and Hambo lets him in on his chance to make the big bucks: resin statues of racist stereotypes, such as “The Gook,” “The Crackwhore” and an African tribal warrior called “Ooga Booga.”  Devin, being an African-American, isn’t too keen on the subtlety of these statues but Hambo is confident they’ll make him rich.  He even gives Devin a large version of the Ooga Booga figure not realizing how offended his friend really is.

Devin reluctantly takes the figure home but first stops into a convenience store to pick up a slushy for his girlfriend, Amber.  The store is held up for robbery by a trio of hoodlums and the clerk is shot dead.  Devin calls the police and the most racist cop on the planet arrives thinking Devin did the deed and thanks to a faulty slushy machine, the cop shoots Devin dead.  That same slushy machine breaks down and rains slush down onto the floor across both Devin and Ooga Booga and magically transfers his soul into the doll’s body which comes allliiive! 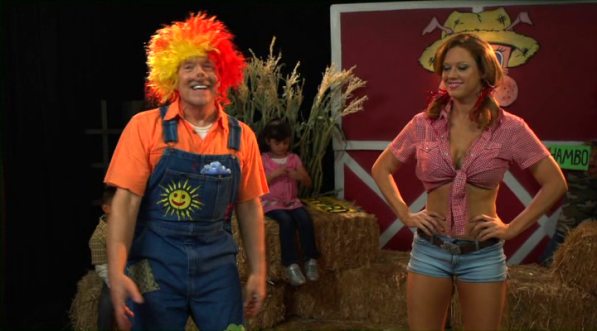 The show to watch if you hate your kids.

Now that the “killer doll” aspect of the film is established, it’s time for the story to veer off the cliff for a little bit to explain how the cop is looking after the trio of goons who are supposed to make and sell drugs on behalf of the also super racist judge of the town, played by Stacy Keach.  Karen Black is also introduced as a racist crazy lady because the film just needs more   victims in it, I guess.  I know the film wants me to think of it as a comedy but takes the racial humour to a ridiculous extreme that it will surely anger the easily offended although I will admit it’s still not as bad as Black Devil Doll.

I did killer doll movies before you were born.

Amber believes Devin to be innocent of the crime and the doll shows up to convince her that it’s Devin, reborn for revenge.  She helps Ooga Booga out by first finding out where the trio are, yet gets raped in the process.  I think Ooga already has a reason to get his revenge — he was murdered after all — but do we need to pile on more reasons?  So we witness the killer doll do it’s thing until the credits roll and that is that.

For as excessive as the racial humour is, the gore is surprisingly light.  Some kills are off screen and Ooga’s big scenes involve his spear going into a guys’ forehead and plucks the eyeball out of both big name actors.  It’s not bad, I liked what I saw, but it still comes off as lacking especially considering how pissed I would be in the same situation.  I did like the puppet effects for the Ooga Booga doll and didn’t even mind the CGI eyes.  So there I said something nice.

To those looking for a killer doll film with a focus on racial humour, this is surprisingly the movie you are looking for.  Killer doll fans have much better to choose from however and should look elsewhere for their pint-sized horrors.

Story: 3 – A young, black man is murdered by a racist cop and comes back as a tribal warrior doll to get his revenge.

Blood: 3 – A couple of plucked eyeballs with a tiny spear is the best the film has to offer.

Nudity: 3 – There is a shower scene but it’s after a rape scene so that’s not very hot.

Overall: 3 – Ooga Booga tries so hard to be a revenge film but that story aspect takes a back seat when the film wants to be a comedy based on racial humour.  Neither aspect is particularly fun to watch.

-Karen Black starred in an anthology film in 1975 called Trilogy of Terror and played a woman attacked by a Zuni fetish doll, an aboriginal warrior which shares more than a few similarities with Ooga Booga.