An African-American med student is murdered by a racist cop but his soul is transferred into a statue of a tribal warrior in order to get his revenge on his killers and racists everywhere.

A sister picks up her brother from a mental institution after he’s recovered from the trauma of killing his father in self defence.  The sister brings him home to destroy an evil mirror that she feels was responsible for their father’s actions.

Directed by Don Mancini Starring Fiona Dourif, Danielle Bisutti and Brad Dourif Nica, a young woman in a wheelchair since birth, is visited by her sister’s family after their mother is brutally murdered the same day she coincidentally received a package containing a Good Guy doll.  Chucky is back with a […]

Directed by Adam Wingard Starring Sharni Vinson, A.J. Bowen and Nicholas Tucci A family gathering is interrupted by a trio of masked killers who systematically take out each member one by one as they make their way through the house.  Only the most hardened of the family members […] 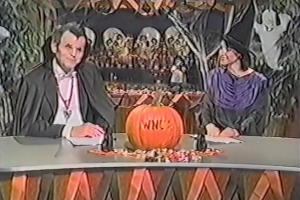 Duncan suffers from terrible stomach pains caused by stress.  It’s so bad it’s keeping him on the toilet all night sometimes.  Unfortunately, this actually causes a monster to form inside his…colon?…and it eventually gets out and takes out his frustrations for him in some very nasty ways.    Can he […]