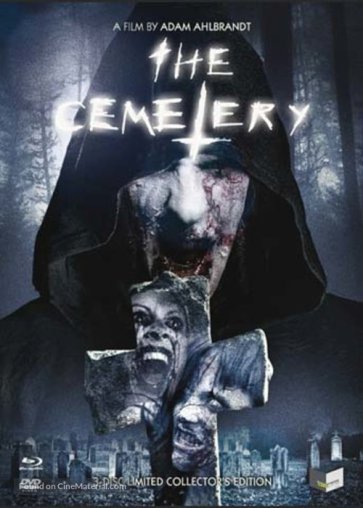 -Scary hooded dude, couple zombie chicks and an upside-down T just to be sacrilegious?  Sign me up!

-Nice of them to make sure to add some tiny headstones below the gigantic head for a movie about a cemetery.

Once you’re in, you can never leave!

After an opening credits montage featuring evil priests ripping the innards out of several poor schmucks, which I’m sure will make sense later, we are introduced to a small group of filmmakers on the hunt for ghosts.  The director has learned that back in the 1600s in Pennsylvania a church was performing torture and supposed exorcisms on the native locals and then buried the bodies in the nearby forest.  Figuring this is their best shot at getting footage of some paranormal activity, the fivesome visit those very woods and camp smack dab in the middle of that cemetery. 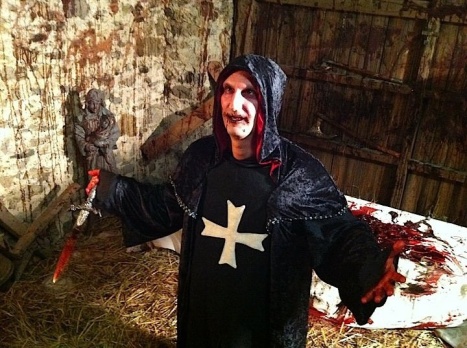 I won’t be attending church this Sunday.

The film establishes very early on that our film crew are not the nicest people in the world, in fact, they’re very unlikable.  The director is a demanding jerk, his best friend is an asshole jock who loves his girlfriend (whom he brings with him) who just so happens to be cheating on him.  There’s the token stoner who sleeps with his friends’ girlfriend.  The last member of the crew is a young medium used to communicate with the dead though she acts as though she’d rather not be there with the director creeping on her at every possible moment. 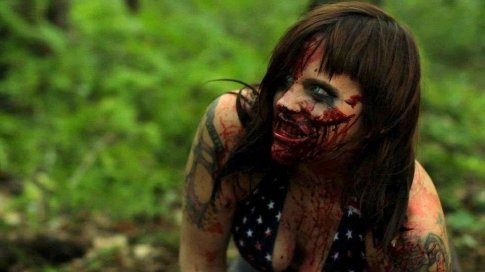 They plan a seance in the woods which doesn’t go very well.  The jocks’ girlfriend and the stoner sneak out into the woods to smoke some weed and have premarital sex which disturbs the evil that was sleeping until those damn kids came along.  An entity is seen on camera (they were recording themselves for…reasons) and it slowly possesses her overnight.  As the crew spread out to find her, they start getting picked off one by one in rather gory fashion. 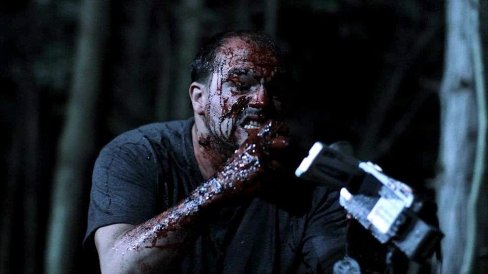 Don’t worry, it’s not my blood.

Character and story development take a back seat to the film’s biggest draw — the gore.  And boobs.  And the soundtrack, unless you don’t like thrash metal, speed metal, whatever it’s supposed to be.  “The Cemetery” features gory setpieces such as a victim stabbed through the throat with a broken bong, there are several decapitations, people’s intestines get ripped out, eyeballs gouged out and in general there is a lot of bloody hacking and stabbing.  Several of the kills are made during daylight, which I expect made them look better on camera than if they had been shot at night which to me makes the film less scary.  Gross, sure, but not scary. 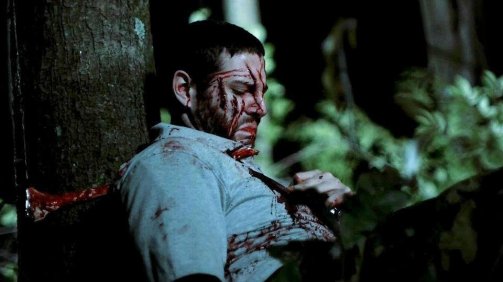 That said, that’s about as good as the film gets.  Aside from the gore factor, “The Cemetery” features some bad dialogue delivered with bad acting featuring a plot thin enough to get stupid people killed in a cemetery.  The video even becomes choppy at times which I wasn’t sure if it was a decision made by the filmmakers or if it was just the camera they were using that was doing it.  It doesn’t come off well is what I’m getting at.  Ultimately, if you’re looking for a silly movie with lots of gore, this movie delivers on that account but falters in every other category.

Story: 2 – A film crew looking for ghosts decides to camp in the middle of a supposedly haunted cemetery basically get what they deserve.

Blood: 9 – The movie is practically sold on the bloody effects which are pretty good.

Nudity: 7 – Various tatted up and pierced women showing their bewbs.

Overall: 3 – Gorehounds will enjoy the vast amounts of blood on screen but not much else.

A list of better movies with people sleeping in weird places include — Chopping Mall, Night of the Demons, Evil Dead, The Outing, and Mansion of the Living Dead.