The country estate of filmmaker James Garrick has been haunted for centuries by a mysterious and deadly curse.  Everyone in his family line comes to a gruesome end at the hand of an unknown supernatural assailant.  When Garrick’s long lost cousin Ann unexpectedly arrives at his manor, mayhem and bloodshed soon follow.  But is Ann the person behind these acts of carnage or could something more horrifying be afoot? 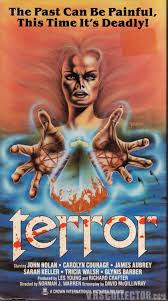 Strange women lying in ponds distributing swords is no basis for a system of government. Supreme executive power derives from a mandate from the masses, not from some farcical aquatic ceremony.

One step beyond horror…

The film opens with a good old fashioned witch burning as the local townspeople have a woman named Mad Dolly tied up for the roasting of a lifetime.  The lady of the nearby estate wishes to watch the burning as the supposed witch has done harm to her family.  Dolly gets free and takes her revenge on the locals and especially the lady by beheading her, then the end…? 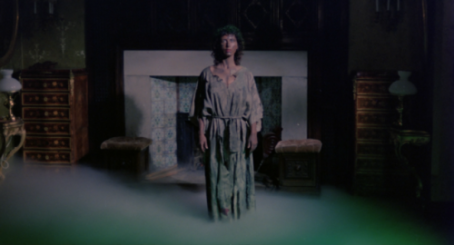 If I went around saying I was an emperor just because some moistened bint had lobbed a scimitar at me, they’d put me away!

It turns out that was just the end of a film screening as the filmmakers and actors were watching the final cut.  James Garrick, the director and owner of the estate, claims the events in the film happened over three hundred years ago and it’s been a curse on his entire family who have succumbed one way or the other in this very house.  While no one really believes the story, things get weird later on when James’ friend, Gary, does his fancy party trick by putting James’ cousin, Ann, in a hypnotic trance.  She stops responding to Gary’s commands and as though something else were controlling her, she attempts to kill James with a sword hanging over the mantle. 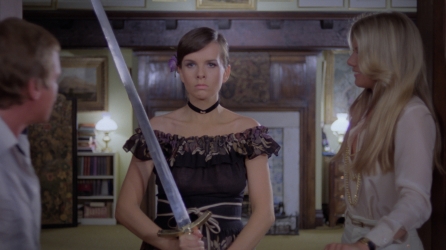 The Lady of the Lake, her arm clad in the purest shimmering samite, held aloft Excalibur from the bosom of the water, signifying by divine providence that I, Arthur, was to carry Excalibur.

Not long after the party, friends and work colleagues of James and Ann are attacked and killed by an unseen assailant.  One by one most victims are done away by bloody stabbings though some kills are more over-the-top such as a broken window pane and death by dropped spotlight.  As his social circle dwindles down, James starts to believe that Ann is the one common denominator among all the murders but is she really behind these terrible murders? 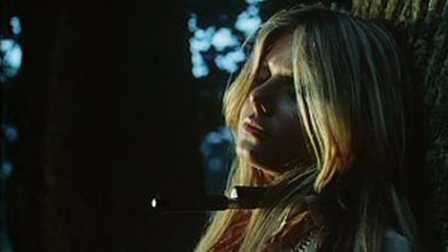 Ah, now we see the violence inherent in the system!

The initial plot involving the family curse starts off just fine but goes off the road quickly due to the victims not being part of the family at all.  There are a few hokey moments such as the levitating car in the trees and a police car attacking its officer that  were more liable to make me laugh than spook me.  The movie moves at a brisk pace mixing supernatural and slasher elements which may not necessarily make sense (so the ghost of a witch is stabbing people?) but I’ll admit that it was fun to watch nonetheless. 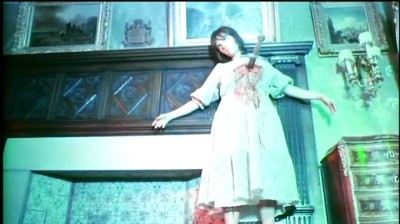 You can’t expect to wield supreme executive power just ’cause some watery tart threw a sword at you!

Many critics have made comparisons between Terror and earlier giallo films by Dario Argento — particularly Suspiria — and the influences are easy to see from the abundance of color used in certain scenes to how some of the murder set ups are filmed.  It’s a good looking, classy British film with some issues but overall I can recommend Terror for a good time.

Story: 5 – After finishing a film based on his family’s curse, a movie director comes to find out the curse may be real as his friends and colleagues are murdered by an unseen assailant.

Blood: 6 – There are several bloody stabbings and a couple decapitations peppered with more unconventional deaths mentioned above.

Peter Mayhew, the actor who until recently portrayed Chewbacca in the Star Wars films, has a brief cameo as a scary mechanic.

Later on the in the film, a victim is attacked in a film studio and gets wrapped up in stock film.  Among that film are nine damaged prints of 1977’s Saturday Night Fever.