The U.S. ambassador to Great Britain comes to find out that suspicious incidents surrounding his family may not be coincidence, that forces of evil are converging around his son because he is the Anti-Christ.

Robert Thorn (Peck) winds up adopting a orphaned newborn after his son dies during birth.  His wife (Remick) is none the wiser and they raise the boy, named Damien, without another thought in the world.  As the young boy reaches five years old, strange occurrences start to begin.  It seems to start as the nanny calls out to Damien at his birthday party before hanging herself high from the Thorn’s home.  It isn’t long before a new nanny suddenly shows up with a keen interest to look after Damien. 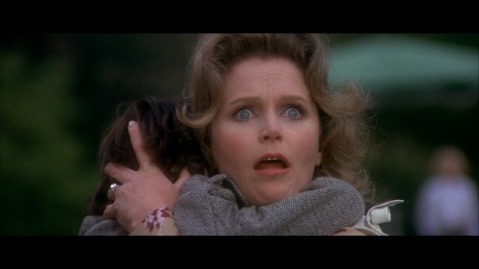 “You think your kid is bad? My kid is literally the Anti-Christ.”

Working at the birthday party, Keith Jennings, the photographer (Warner) takes several pictures of people there and after developing them notices scratches and shadow lines around their bodies, marking these people with certain fates later on.  He notices one picture that he caught himself in the mirror and notices the same scratches around him.

A priest visits Robert to warn him of Damien’s evil upbringing but Robert believes him to be crazy and despite several attempts to warn him, Robert believes nothing to be wrong until the priest is killed in a freak accident.  Robert delves further into the priest’s past and along with Jennings, discovers a horrifying conspiracy involving Damien.  Another priest gives him the tools he needs to end this madness but Robert has the dreadful choice of deciding whether or not he can harm his son that he still loves.

If there’s one subgenre of horror that I haven’t watched many of, it’s the whole “anti-christ” type of movies.  It’s not a type of film made often these days, but from the 60’s-80’s there were quite a few released.  The few that I have seen weren’t terribly great, usually because of the films were dealing with issues that were big at the time and not so relevant today.  It may also have something to do with me being an atheist and it’s sometimes hard to take a lot of religious symbolism seriously, although I can concede that the devil is a great villain.

In the end, there can be only one. Oh wait, wrong movie.

That all being said, I found The Omen told an interesting story, provided several terrifying moments and with some disturbing imagery the film manages to keep tensions high.  The movie never seems to pick up the pace but it uses that slow pace to its advantage at times, in particular, the decapitation scene which seems to linger just a little too long.  So if you can deal with a movie that takes its time to get to the good stuff, you should enjoy this tale about Satan taking over the world.

Story: 8 – A man desperate for a family unknowingly adopts the Anti-Christ.

Blood: 5 – The film isn’t overly bloody but make no mistake, the kills shown can be disturbing to some.

Overall: 8 – The score may drop if you’re not into older style films, but it’s still a well-made thriller with plenty of tension leading up to the shocking finale.

-The film is noted to carry a curse due to incidents occurring to the cast and filmmakers.  Gregory Peck and screen writer David Seltzer took separate planes to the UK and both were struck by lightning.  A later flight Peck was supposed to take, but cancelled, wound up crashing and killing all onboard.  The hotel that director Richard Donner was staying at was bombed by the IRA and he was later hit by a car.

-Peck had seemingly retired seven years prior to taking the lead role in this film.  He took a huge pay cut but was guaranteed 10% of the box office.  The film made over $60 million and wound being Peck’s highest paid role.

-Warner Bros. was originally going to do the film but instead put their efforts into filming Exorcist II: The Heretic.  20th Century Fox picked up the film and it wound up being their highest grossing film at the time.  (Star Wars would then shatter that record the following year.)

-A remake was released in 2006 (the original film’s 30th anniversary) starring Liev Shrieber and Julia Stiles.  It wasn’t that good.