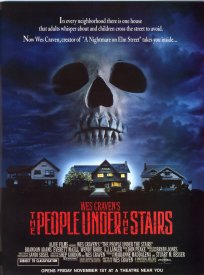 Threatened with eviction, a 13-year old boy nicknamed Fool (Adams) follows Leroy, professional criminal, to the house of the landlords in order to steal from them the money they need.  Once inside, however, they are shocked at the horrors that reside in the house.

On his 13th birthday, Fool (Adams) finds out he and his family are getting evicted by their landlords, The Robesons, who own quite a few apartment buildings in their ghetto.  Leroy (Rhames) decides to get back at the landlords by breaking into their house and robbing them.  Along with an accomplice, they manage to get into the large house but they quickly find out that it’s far from any average home.

The Robesons (Robie and McGill) are brother and sister yet refer to themselves as “Mommy” and “Daddy” which probably sets off a few red flags for the neighbours.  They also have a basement filled with dusty children who have become cannibals forced to live in the dark.  The Robesons have a young daughter, Alice, who appears to be one of the children downstairs but allowed to roam upstairs.  When Leroy and Fool get in trouble, Alice winds up saving Fool and taking him through the walls of the house and into the basement.  I didn’t know you could do that in a house.  Fool decides to rise up against the crazy cousins and gathers some of the neighbours to free the kids.  Is this the horror equivalent to Temple of Doom?

I think my biggest complaint with the movie is that I think it’s supposed to be a serious film but it’s way too comical to be scary.  Because of this skewed presentation the film feels off, at times I wasn’t sure what I supposed to feel, tension or humour.  A big part of the problem may have to do with the over the top presentation of the villains, becoming a parody of what they were trying to be.  As a straight horror film it doesn’t deliver enough thrills to enjoy it as such.

The film isn’t terrible: it has a decent story, shows off a moderate about of blood and if you like cheesy acting, you’re in luck because the Robesons are drenched in it.  It’s all about knowing what you’re getting into.  Think of it as a horror/comedy and you may enjoy it more than a fright film because you may be disappointed in that respect.

Story: 6 – It’s not that it’s a bad idea, just the execution is off.  Prepare to laugh, maybe unintentionally.

Blood: 4 – Some stabbings, gun shots and the guts of an already dead corpse.

-Hilary Swank auditioned for a role as one of the children.