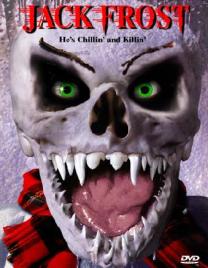 A serial killer’s ride to his execution is interrupted when the vehicle transporting him crashes into a tanker truck carrying “genetic materials” and he melts into the snow becoming whatever he wants to be…which is a snowman.  He escapes to get his revenge on the sheriff that stopped his bloody rampage.

After an odd intro with a man narrating a “happy, scary” story to a little girl to establish just how awful Jack Frost really is, this segues to Jack being transported to his execution in the “state executional transportation vehicle.”  I wasn’t aware of “executional” being a real word.  The drivers are taking him to his execution in a pretty bad snowstorm and crash head on into a truck carrying genetic research material that covers Jack and melts his body into the snow but it actually merges his DNA with the snow…? 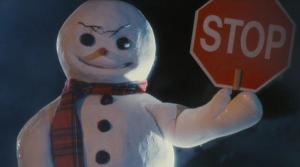 Even the damn snowman thinks you should stop watching the movie!

During a flashback sequence, we learn that a sheriff of a little town called Snomonton had caught Jack by surprise and arrested him.  Jack swore revenge on the sheriff and there’s our big confrontation for the film.  The sheriff starts to investigate some strange deaths in town before learning that Jack is still out there and he knows he’s gunning for him.  Jack goes on another killing streak, brutally murdering the townspeople while the sheriff gets some help from the FBI before the final confrontation. 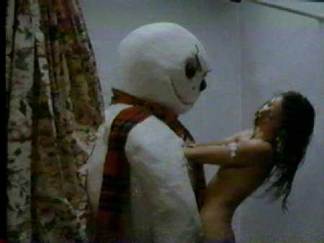 I bet she still has nightmares about this.

The film is obviously meant to be a comedy, though there’s an underlying seriousness and it carries a mean streak that kills any kind of humour the movie tries to generate.  Most of the film isn’t that funny anyway, the majority of the jokes, sight gags, plays on words, acting, etc.  fall flat and do more to make your eyeballs roll back than make you laugh.  The funniest parts of the film, to me at least, was trying to figure out if the errors I was catching on screen were deliberate or not.  Comedy is relative though, maybe there are some out there that find this funny, but how is the horror aspect of Jack Frost? 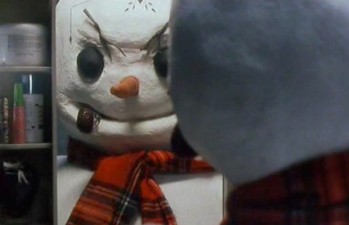 Even though the film plays like a parody of slasher films, it’s still a violent slasher so the filmmakers thankfully put in some over-the-top kills that actually plays along with the fun that the movie was trying to deliver with its humour.  Among the snowy slayings, we get a decapitation via sled, an axe down someone’s throat, an elderly lady getting her face smashed into ornaments and then tied to the Christmas tree, and a pre-American Pie Shannon Elizabeth getting snowplowed in the tub.  Kind of funny, but super mean, especially when you realize all of those scenarios happened to an entire family.  It’s a morbid thought especially when it’s being done by a fucking snowman.  And by that I mean an actual snowman that can fuck. 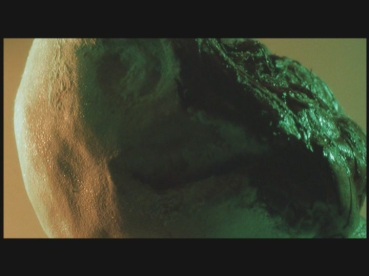 Your brain on drugs.

The film tries so hard to be funny it bashes you over the head constantly with a variety of different comedy styles failing at the same time.  Everything is supposed to be so bad it must be hilarious, only it isn’t funny.  The film’s only ace up its sleeve was the snowman gimmick and it’s one of the top reasons why the movie fails.  It barely moves, and when it does it looks like a Muppet creature.  It certainly doesn’t look like the freaking evil creature on the box cover! Oh, and Jack thinks he’s funny, so we get to hear the snowman make jokes and one-liners that are also not funny.  Not even close.  Arnold Schwarzenegger was funnier in “Batman and Robin” with similar material.  BAM!

Story: 1 – It’s a killer snowman movie and now you’re telling me, “So what were you expecting?”  Certainly not the most evil, rapey snowman I’ve seen since Michael Keaton’s version of “Jack Frost.”

Blood: 6 – The effects guys couldn’t have had much money to work with, but they did come up with some inventive, and brutal, ways to use a killer snowman.

Nudity: 2 – Shannon Elizabeth starts her career with a bang by being naked with a snowman.  I bet she leaves this off her resume.

Overall:  2 – Well, unless you want to cross “watch the killer snowman movie” off your bucket list, maybe you should keep clear of this piece of yellow snow.

-Something I did find funny:  There are scenes that contain visible snow in the close up shots but pulling away reveals that that’s the only snow in the area, it’s totally bare everywhere else.

-The revelation of Jack’s weakness to anti-freeze relies on one terrible coincidence.  The scene involves the sheriff pouring “special” oatmeal that his son made him into Jack’s mouth and being told that there was anti-freeze in him.  His son is evil…or really stupid. 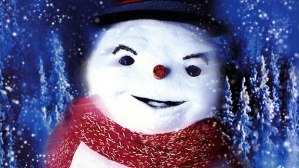 The remake wasn’t any better.