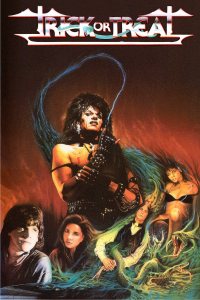 Eddie Weinbauer is a lonely, loser metal head in high school who is given the only copy of a record (this is set in the 80s after all) that was never released from his rock idol who died in a tragic accident.  Eddie discovers the record is actually a portal and his idol is reaching out from the dead.

His fans won’t let him die.  He won’t let them live.

To Eddie, Sammi Curr is a metal god.  Of all the posters Eddie has hanged up in his large bedroom, Sammi’s hangs highest and proudest.  Sammi Curr is a supposed devil-worshipper, which was something people were very much concerned with in the 70s and 80s, and so his lyrical work may be harmful to children.  Eddie is a social outcast in school, the constant target of ridicule and humiliation (see Slaughter High, Evilspeak, Phantom of the Mall for similar themes) who uses Sammi Curr’s music as an outlet to get by every day.  See where this is going? Tragedy strikes when Sammi is killed in a mysterious hotel fire and ruins Eddie’s day. 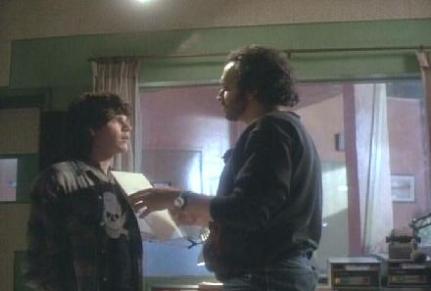 Following the events of the fire, Eddie stops by the local radio station where his friend and station disc jockey, Nuke (Simmons) gives him the only known record to exist of an album Sammi Curr never released.  Eddie falls asleep to the record but is awakened when it’s stuck in a loop and notices a sound that doesn’t belong.  Playing the record backwards, he’s just not hearing a message worked into the song, it’s Sammi Curr talking to him from beyond and willing to help Eddie in seeking some form of revenge on the preppy, pop music-loving jerks that incessantly pick on him.  In exchange, Sammi just wants to make sure his last album is played at midnight on Halloween.  Nothing foreboding about that!  Eddie blindly follows his now dead idol but when things start to get serious, Eddie wants to back out but it’s too late, Sammi wants out! 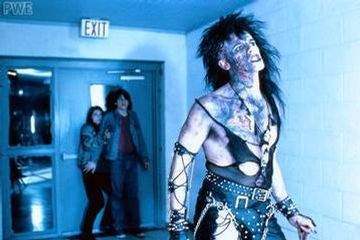 During the 80s, especially at this time of the decade, there were numerous horror films coming out so it took something different to stand out from the typical slasher mould.  Enter Trick or Treat with its heavy dose of supernatural themes to accompany the heavy metal.  The filmmakers really took what some people actually feared about metal bands — who all have deals with the devil you know — and made a terrific movie out of it. For a flick that’s about thirty years old now, it still touches on subjects that are still major issues today such as bullying in school, though back in the 80s it was just a convenient plot device to get the outcast misfit to let loose on his bullies. 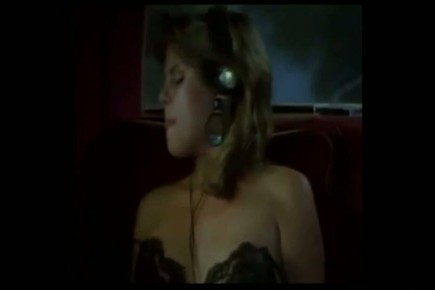 If you love the 80s, whether you were born during that time or at least have an appreciation for it, you’ll have a better time with this movie than others will.  From the hair and costumes to the soundtrack, the movie screams with that classic 80s vibe.  To make sure the film had metal cred, Gene Simmons and Ozzy Osbourne were hired to cameo in the film and while Gene is quiet and subdued in his few scenes, Ozzy has a great little cameo as a televangelist that I had a good laugh at.

Story: 8 – The picked on nerd getting revenge plot isn’t terribly original but I really liked the effort put into this film to make it more than just a regular slasher film.

Blood: 4 – The film was not as bloody as I expected it to be, but it doesn’t make the movie any less entertaining.  Most people killed are blown into an explosion of sparks though there is a scene where someone gets their ears melted off (they couldn’t handle the metal) and there’s a few head explosions, just with sparks, not blood.

Nudity: 6 – There isn’t much but the brief scene with Elise Richards topless in a scene that’s almost hot but then you realize it’s not ending well.

-Star Marc Price is mostly well known from, what else, the 80s sitcom Family Ties.

-Directed debut for actor Charles Martin Smith, known to most people as “Toad” from American Graffiti.