A true crime novelist moves into a house where an entire family was murdered to use as a backdrop for his next book.  He finds a box of old Super 8 movies in the attic and upon watching them he releases a supernatural evil that puts his family in great danger.

Once you see him, nothing can save you.

Ellison Oswalt, a crime novelist, moves his family into a new house to work on his next book which he hopes is a hit because he needs one to keep his family afloat.  The house has a disturbing history that Ellison keeps from his wife, but he’s using that same tragedy as the background for his new novel.  A family was hung from the tree in the backyard and their youngest child went missing.  One day, up in the attic, Ellison happens upon a box of old film reels alongside a film projector.  They’re labeled innocently enough and he sets a reel up to see what’s on it.  What begins as a family gathering turns into a gruesome murder as Ellison witnesses the hanging of the family on screen. 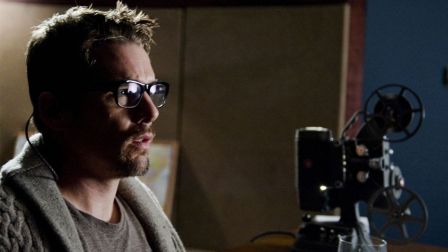 Someone found the stash of stag films.

Choosing to investigate the films further rather than get the police involved, he continues watching the other film strips which all have a different family being killed in various disturbing ways.  Enlisting the help of a fan and deputy on the police force, to help him dig deeper into the murders, he feels he’s on to something big and sees dollar signs.  He continues to pursue a connection between these mass murders and finds one in a symbol left in some of the crime scene photos.  With the help of a local professor (Vincent D’Onofrio!) who specializes in the occult, we learn the symbol belongs to a little known, Babylonian god named Bughuul, who allegedly is able to use depictions of itself as portals and has killed families while taking their youngest child to consume slowly over time. Lovely.

Cramped up?  That’s what you get for sleeping in a box.

Sinister is a terrific haunted house flick that introduces a villain with an interesting mythos later on in the film, yet he’s only seen for a few moments at a time. Instead, the majority of the film is showing how far Ellison willing to push this yet he unknowingly invites this entity into his life and jeopardizing his family.  The closer he gets to the truth, the more he needs to know the answers and when he gets too deep that’s when Bughuul shows up to do his thing — give us a good jump scare or two on top of all the spooky, haunted house stuff that leads up to his arrival. 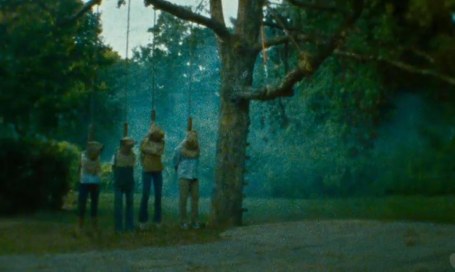 Since I’m a sucker for a good haunted house movie, I was happy to see the film start down this road and slowly building up it’s finale with a demonic entity showing up.  The film isn’t overly graphic though there is plenty of blood seen on walls and the kills that are seen are very disturbing in nature.  My eyes were glued to the screen most of the time and was on edge more than once so the film accomplishes what it wanted to do and it did it well.  Definitely recommended, though I’m not sure about Sinister 2…

Story: 8 – Crime writer tries to solve murders on his own but realizes too late that there’s an evil supernatural force involved and coming for his family.

Blood: 8 – The kills themselves aren’t graphic, again taking a less is more approach, but they are definitely unsettling in nature.

Nudity: 2 – Some decent cleavage out there, I suppose.

Overall: 8 – This is the first time I’ve watched the film since I saw it in theatres where I thought it was very good and I still think so now.

-The original idea for the look of Bughuul/Mr. Boogie was more like Willy Wonka but that was dropped when it was decided that maybe it’s too silly.

-Ethan Hawke never saw the family murder footage on the Super 8 reels until it was time to film so some of his reactions you see are real.