A Salem radio DJ is the target of a coven of witches who plan to use her to bring back their master and gain revenge on the town that crucified them centuries ago.

Witness the shocking footage taken from all points of view of a small town that is overcome by an ecological disaster involving mutated isopods.  (Don’t Google that if you want to avoid creepy images that will haunt your dreams.) 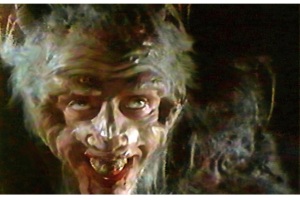 A woman returns to the home of her lover, a clergyman, who had committed suicide only to be tormented by several entities in the house, including the spirit of her former lover.

Directed by David Bruckner, Ti West, Adam Winguard and many more Starring Calvin Reeder, Lane Hughes, Kentucker Audley and many more A trio of burglars who like to record their exploits are hired to break into an hold house and steal a rare VHS tape.  Once inside the house, […]

Directed by Scott Derrickson Starring Ethan Hawke, Juliet Rylance and Fred Thompson A true crime novelist moves into a house where an entire family was murdered to use as a backdrop for his next book.  He finds a box of old Super 8 movies in the attic and […]

Directed by Conor McMahon Starring Ross Noble, Tommy Knight and Gemma-Leah Devereux A terrible, child-hating clown dies in an accident during his last gig at a boy’s birthday party.  Years later, the boy puts on another party and the clown rises from the dead to take revenge on […]

Directed by John Lechago Starring Trent Haaga, Victoria De Mare, Al Burke and Tai Chan Ngo On the charges of not being evil enough, demon clown Killjoy is pulled into the courts of Hell and put on trial.  Now he has to rely on his minions, Freakshow, Punchy […]