A woman returns to the home of her lover, a clergyman, who had committed suicide only to be tormented by several entities in the house, including the spirit of her former lover. 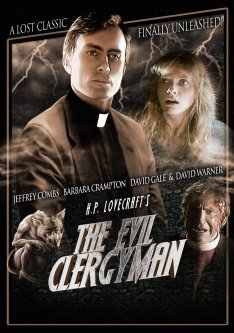 -Considering the cast alone, I would rent it based on the faces I see.  Especially the rat thing.

-Jeffrey is sleepy, Barbara is horrified and David Warner has the only reaction that I can understand because he’s next to the rat.

-Isn’t it a little presumptuous to call your lost film a classic when it hasn’t been seen?

The short film opens with Said Brady (Crampton) showing up at the home of her former lover, Jonathan (Combs), a priest who had committed suicide recently.  The old landlady berates Said at every opportunity for their sinful decadence they showed in the bedroom, even saying she listened at the door even though she didn’t have to.  The old lady tells Said of strange occurrences happening in the home, especially that of a chair that she swears moves back to the place where Jonathan hung himself before leaving Said to her grief.

As day turns to night, Said begins to hear whispers, seemingly from Jonathan calling out to her.  She begins to see him and while trying to process whether he’s alive or not he wants to continue where they left off in bed.  Said is visited by another entity, a rat with a human face (Gale) with the dirtiest mouth you’ve ever heard from a rat.  Another spirit arrives, that of a victim of Jonathan’s rage, seemingly to help Said and warn her that the rat is a familiar for her dead lover which most certainly wants her soul.  Said’s night goes from bad to worse as she fights the urge to be with her lover but she may want to keep that soul. 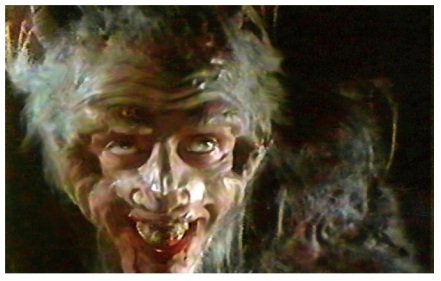 The Evil Clergyman is an interesting release, as it was intended to be part of an anthology film called Pulsepounders to be released by Empire International Pictures in 1988 but the studio shut down before it could be released.  Lost to time, a work print of the short was found over twenty years later which then got cleaned up and scored for commercial release.  It may not look the best, but the filmmakers admit this is the best it’ll ever look and it’s certainly serviceable to watch considering the state it was in. 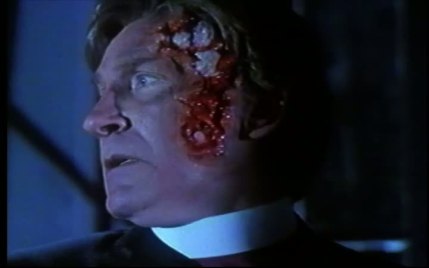 I’ve had better days, but thanks for asking.

Based on a short story penned by H.P. Lovecraft, whom Empire had success previously with adaptations of Re-Animator and From Beyond, it made sense to bring back their favorite Lovecraftian actors Jeffrey Combs and Barbara Crampton who are once again in fine form as a tormentor and the tormented.  You can’t go wrong with having David Warner’s soothing British voice in your film and seeing Re-Animator‘s Dr. Hill as a potty-mouthed rat creature was the cherry on top for me.  It’s a quick watch at barely half an hour, and there was a time where I hoped it was longer, simply because it was fun and I hoped for more as it was wrapping up.  What more can you say?

Story: 8 – A woman lets her passions for her deceased clergylover get the best of her as his spirit torments her and craves her soul.

Blood: 3 – Considering the supernatural nature of the film, it’s not too surprisingly light on the flowing blood.

Nudity: 5 – Barbara Crampton in simulated sex scenes but no nudity?  I’ll take what I can get but c’mon.

Overall: 7 – A fun watch and a rare viewing of something old that’s new again.

-As stated earlier, The Evil Clergyman was supposed to be part of an anthology film.  The other films were Trancers II (which eventually got a proper release so the footage from the Pulsepounders version was incorporated into the original film and is known as Trancers 1.5) and Dungeonmaster II which sadly has not seen a proper release.