Two American girls arrive in Romania to learn the local culture which may include becoming the targeted infatuation of a vampire returning to his hometown after years of exile and a chip on his shoulder.

-Well this cover doesn’t come off as rapey at all.

-I bet that vampire could carry the body a lot easier than those little creatures are.

-A couple of them are clearly pushing in the wrong direction.  Where’s the supervisor?

The night has fangs!

As the film opens in creepy Romania, vampire Radu (Hove) returns to his family home/castle to find his father, the king of the vampires (Scrimm), sucking on the Bloodstone, a powerful relic that grants the sucker powers and Radu wants it.  His father is surprised to see him since he was banished a hundred years ago for wanting to break the peace between humans and vampires.  Fearing the worst if Radu get it, the king attempts to stop his son but succumbs to Radu’s attacks.  The king is dead, long live the king. 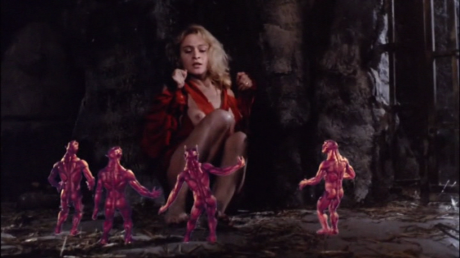 I bet she’s not getting paid enough for this job.

The next day, Michelle and Lillian, a couple of American students arrive to study Romanian culture and superstition along with Mara,a local who went to school with them while in America.  Apparently there are no rooms to rent in this small village so the historical society says they can stay in a nearby castle along with a historian, Stefan.  Stefan falls in love with Michelle, which is unfortunate since he’s a vampire, though he doesn’t care for it, but he’s also Radu’s brother.  Stefan looks normal in comparison to Radu’s hideous mug because their vampiric father was with a human woman who gave birth to Stefan, yet another reason for Radu to detest his brother.

No sequel for you!

The movie seems to start off on the right foot with an interesting introduction featuring an evil vampire son going after his father, the king of all vampires, and attempting to get this powerful relic.  That’s over in five minutes and goes into a more mundane romantic drama with a jealous brother subplot.  Some of these characters are vampires, of course, so things do get bitey occasionally, however I found the film fairly boring and uninteresting aside from when Anders Hove’s Radu was on screen as he at least brings some energy to the film.  When he’s not on screen though, I can’t say there was much else that kept me interested aside from the Romanian countryside.  Hopefully the sequels fare better and this first film just lays a foundation to build on.  It’s still better than Twilight! 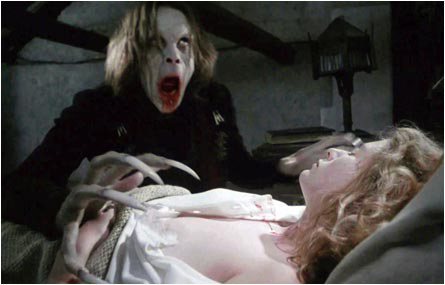 Even vampires look silly during orgasm.

Story: 5 – An evil vampire seeks to destroy the peace between creatures and humans, but first he has to ruin his brother’s date.

Blood: 6 – A decent amount of bloodletting in the traditional vampire manner, some decaps as well.

Overall: 4 – It’s not that Subspecies is necessarily bad, however it’s not an instant recommendation either.  The series has its fans but I just don’t count myself among them.

-The first American production to be filmed in Romania.

-The titular subspecies (the little red creatures) were originally portrayed by locals in rubber suits however the filmmakers didn’t like how the scenes looked so David Allen (who also brought the puppets of Puppet Master to life) was hired to do the stop motion of the creatures instead.

-Radu was named after Vlad the Impaler’s brother.