A man kills an intruder and goes on the lam with a woman he just met all the while a killer with a mannequin fixation follows close by.

-Four eyes, one mouth and one boob….aww yeaah!

-I guess I know what kind of nightmares Picasso may have had.

-I’m not going to see this thing in the movie, am I?

-One day I’ll have to look up what “spasmo” means.  It may hold a clue.

Mannequins, a killer and bad dubbing, oh my!

After a disturbing opening involving a young couple making out in a dark building only to discover a mannequin hanging nearby, which I’m sure will come into play later, [Ed: It won’t!] we venture forward to the next day,where Christian and his girlfriend are out for a drive when they come upon a body lying face down on the beach; at least this body is real and very much alive introducing herself as Barbara.  Barbara beats it after they offer her help but they see her again later on at a super classy party a boat put on by a pompous snob of a host.  He’s leering around Barbara but she has her eyes on Christian who dumps his girlfriend at the party and leaves with Barbara instead.

Insisting that Christian shave his beard before sexy time, he relents and goes into the bathroom when he’s attacked by an armed assailant.  Christian fights back and grabs the gun, shooting the attacker in the process.  Insisting they leave immediately, Christian and Barbara are on the run as he may be wanted for murder.  While trying to reach his brother, Fritz, Barbara suggests her friend’s spacious castle to hide out but meet an odd couple of an older man and much younger woman who say they are renting the place. 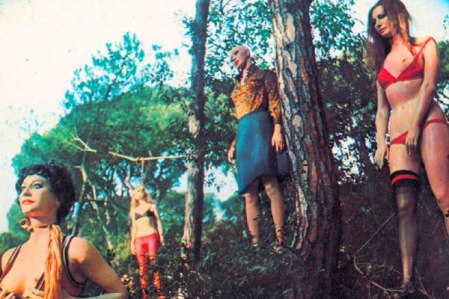 Where RealDolls go to die.

Christian agrees to stay in order to stay hidden although it seems everyone wants to play mind games.  He’s even seeing the killer he thought he had accidentally killed the day prior.  He leaves in a panic after discovering the body of one of the renters and now he’s being sought after by Barbara, his brother and even a killer!  The story goes on and on with an incredible amount of twists and turns and by the end of the film you’ll learn that everyone that was good was bad, the bad guys are even worse and you were pretty sure there was a killer mentioned somewhere in the hilariously overdubbed psychoanalytical script.

So many choices, so little time.

Featuring a lighter take on the violence and doubling down on the mystery aspect to capture your attention, the film succeeds only partially in that respect with several “Huh?” moments that confuse the audience expecting more of a typical hack and slash whodunnit.  By the end, I kind of liked what the film tried to do with the story but not so much while I was watching it.  It didn’t help that the kills were light on tension and blood and heavy on mannequins. While I admire the filmmaker’s wanting to make Spasmo look at least a little aesthetically different with the addition of the scary mannequins, they’re just window-dressing and barely a thought to anything that matters and without any explanation.  At least they’re creepy, right?

Story: 6 – A crazy man kills a crazy person and goes on the lam running into other crazy people who are probably making him more crazy until he goes super crazy.

Blood: 3 – The majority of the kills are off screen so there’s not much in the way of stylish bloodshed.

Nudity: 3 – Light boobage in a scene that’s not very hot.

Overall: 4 – As a giallo, it’s more about the mystery over stylish and bloody violence and features an incredible winding story that certainly takes you places but it’s rather confusing and not terribly exciting.

-Umberto Lenzi left the murders unseen in the original release of the film.  For the American release, George A. Romero was hired to direct around ten minutes of extra footage to fill in the murder scenes that the audience would want to see.