A killer dressed in a motorcycle outfit and helmet targets a group of individuals who all share a connection to a terrible tragedy in the past and makes them pay the ultimate price. 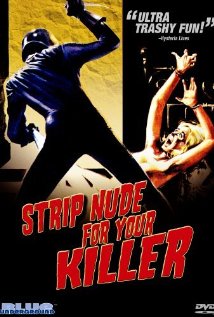 -One of the few movies I’ve watched with a title that I shouldn’t repeat out in public.

-Hey, this movie might have boooobs in it, guys!

-Honestly, I’d do the same thing if given the option if it helped me not get killed.

He likes to watch you…die!

The film opens with what appears to be an abortion that goes wrong when the woman passes away due to heart failure.  The doctor calls someone in to help him stage the body as though she died in an accident.  The body is taken back to her home and after leaving the building the doctor is promptly murdered by someone in a leather motorcycle outfit and matching dark helmet.  It’s like the movie is over in five minutes.

Ever hear of a casting couch? How about a casting sauna?

Later on at a modelling agency, our lecherous hero photographer Carlo brings in Patrizia, a new girl he just found and had sex with at a nearby public pool while promising her a job with the agency.  I never said it was a high-end modelling agency.  It seems the entire male staff treat all the women like meat and they get away with it too!  It’s like they’re all James Bond without any of the charm.  More members of the staff and the models are killed by the same pissed off motorcyclist then Carlo launches his own investigation with the help of fellow photographer and part-time lover, Magda.  As they get closer to the truth, the killer moves them to the top of the kill list.

At least clean it off before you use it!

The “story” lives and dies on the opening and closing scenes to explain the killer’s motive.  Everything in between is where the supposed trashy fun is but I came away bored and finished barely awake by the time the credits rolled.  A constant stream of hot, nude models will never be a complaint however they are mostly treated poorly throughout which makes their scenes less titillating than they should be.  The close up of the stab wounds might be shocking initially but all the killer does is stab people with a switchblade, a giallo staple, which becomes redundant quickly.  It doesn’t help that the blood doesn’t look anything like real blood but that was very common to see bright, watery blood in these films.

Not the killer but you still wont like him.

I got some laughs early on with the un-PC like characters that I’m apparently supposed to like however I felt as though there were no likeable characters to feel sorry for when the murdiddlyurderer showed up and left them in a pool of red paint.  The perverted hero of the film knocks off the helmet to reveal who the mysterious killer really is and explains the odd abortion scene at the beginning of the film which makes the film come off like a gory Scooby-Doo episode with an awful dubbing job thrown in to boot.

Story:  5 – A killer in a motorcycle helmet stabs people to death for reasons while a photographer stops humping women long enough to figure out who it may be.

Blood: 5 – Stab wounds all over the place are brutal, and eventually redundant, but the red paint that comes out of them lessens the impact.

Nudity: 9 – Lots of beautiful and naked women, the film delivers on that aspect with flying colors.

Overall: 4 – Aside from the flesh parade, the film does just enough to be another average giallo with a wonderful title.

– Writer Massimo Felisatti asked the director to also take story credit as to not take the full brunt of responsibility for the script.

– Five minutes were trimmed from the film to obtain an X rating in the UK.

– The killer never actually makes anyone strip for them.