A trio of dumpy sorority sisters invite equally dumpy looking fraternity men to a party but wind up getting possessed by succubi who want nothing more than to suck….the life out of men.

The film starts with Omar, a spiritual medium, revealing a woman’s dead husband’s last few hours with another woman when he’s suddenly frightened by an evil power that creeps in on his work.  A pair of arms come out of the ball and rip his head off and that’s how the movie starts!

The next day, a sorority girl named Marci (Stevens) buys most of Omar’s stuff up in a yard sale, one of the objects being the crystal ball.  She, along with a couple of her sorority sisters, decide to have a party and she invites three nerdy fraternity guys over.  They’re not exactly excited at the prospect of spending the night with the least hottest members of the sorority, but it’s better than being bullied by the preppy fraternity brothers. 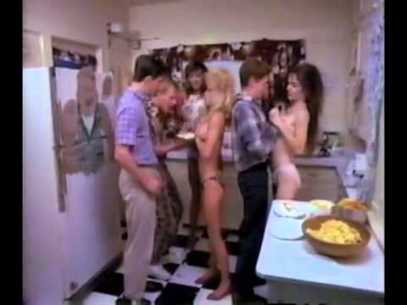 The party, to no one’s surprise, is fairly lame until Marci pulls out the crystal ball and apparently has the instruction manual.  While trying to call a spirit, Omar shows up again and warns the women of an evil coming for them.  He can protect them if they touch the crystal ball, but doing so turns them into a trio of super hot, super naked bimbos much to the nerds surprise.  A succubus has possessed the girls and of course, wants to have sexual relations with any male around.  The preppy fraternity boys are shocked to discover the nerds are gonna score with these ladies so they skirt the nerds away to take over for them only to discover too late that the girls will literally suck them dry.  The only thing the nerds can do is call an exorcist and hope for the best. 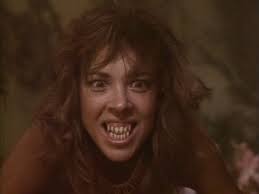 My what big teeth you have….don’t go down there!

If you couldn’t tell by just looking at the movie poster, there’s only one real reason to watch this movie…well, three reasons (six if you want to get real pervy about it.)  The movie is not much more than a showcase for these lovely scream queens to show off their curves and ham it up in front of the camera.  The camera leers at the ladies for so long you can’t help but leer along, especially during that extending bathtub scene!

You’re not leaving until you take a bath!

The movie is super low budget, reportedly shot in four days for around $40,000 which was left over funds from the filming of another film starring the same female cast called “Sorority Babes in the Slimeball Bowl-O-Rama” and uses much of the same sets as well.  So if you think the film looks like it was shot in a weekend, that’s because it was!  The movie is perfect for horny teenagers cruising for boobage, but that’s all you’re going to get out of this.  It’s not that funny, certainly not scary, but it does have a strange charm about it as the whole cast is committed to this oddball movie right to the end.

Blood: 2 – Aside from Omar’s head getting yanked off, there’s not much in the way of anything violent seen on screen.  The male victims get turned into dust off screen.  There’s a ghoulish looking succubus seen but it looks like an undead muppet.

Boobs: 9 – I guess there was some nudity in there somewhere.  I may have blinked and missed it.

Overall: 4 – Make no mistake, you’re watching the movie because of the boobs on display and nothing more.  Any other enjoyment you get out of the movie will be purely coincidental.

-Originally the women were supposed to be completely nude in the film, but Brinke Stevens objected to doing full frontal nudity so the characters were tweaked to be topless instead.

-The girls provided or made most of their clothes for the film.

-Music for the film was performed by a band called Haunted Garage, whose frontman Dukey Flyswatter also appears in the film as Omar.