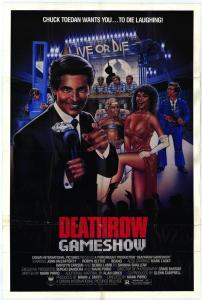 The host of a gameshow that kills off death row inmates is on the run from a hit man hired to kill him after his show kills off a mob boss.

Chuck Toedan hosts the popular game show “Live or Die” where inmates from correctional facilities are given one last chance at a life out of prison (and win wonderful prizes!) if they can survive the gameshow until the end or else they’re killed off in hilariously entertaining ways.  He’s living the life aside from the fact that the show isn’t totally popular with the public and his most outspoken detractor wants him off the air.  He can deal with all of that but one thing that’s not going well is the fact that a hit man has been hired to kill Chuck because he killed a mob boss on the show and they want their revenge. 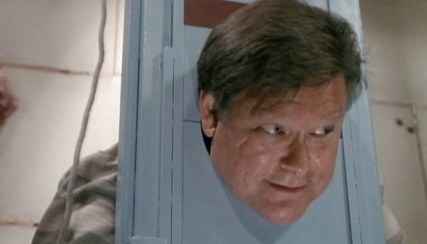 The first thing going through your head might be that the movie kind of sounds like Arnold Brownshwegger’s early hit, “The Running Man.”  Both movies have a similar backdrop of a gameshow killing off death row prisoners but unlike Running Man’s focus on futuristic action, Deathrow Gameshow goes running in a totally different direction by being a dark comedy as it follows a typical day for our gameshow host who winds up way in over his head.

The best parts of the film are (shocker) the gameshow segments and the commercials that feature prisoners.  An example of the movie’s twisted sense of humour is featured in the opening where a prisoner is in a guillotine and must guess the title of a movie.  He sadly doesn’t get it BUT if his head drops in the bucket facing up, his family will win $10,000 and wouldn’t you know it, there’s a happy start to the movie.  The rules are never explained but the end result is usually what you’d expect: an over-the-top, gruesome death. 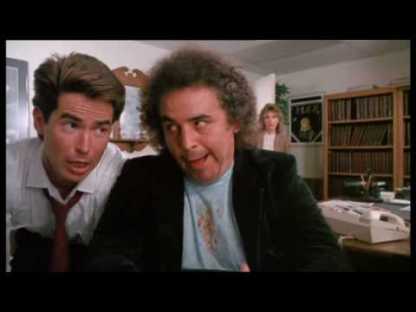 Maybe as a way to show signs of a conscience, the movie throws in a moralistic character who opposes these exciting death penalties, but since this is an 80s comedy she just becomes a ditzy love interest.  The main bad guy is the hit man hired to kill Chuck played by an actor named Beano.  He’s so bad he reminded me of “Windy City Heat”’s Perry Caravello (which you should see to really appreciate how negative that comment is.)  He’s the worst of the main cast though the majority of the secondary cast act like total idiots which was something that happened often in movies back then.  It’s a weak attempt at humour, showing people being mindless idiots, and made me pine for the next round of the gameshow instead.

The movie isn’t too gory, often shying away from some of the bigger kills that perhaps would’ve stretched the tiny budget too thin.  The film tries so many different types of humour but it avoids what I thought was the obvious gross out humour (aside from a couple of scenes featuring Beano not properly eating spaghetti because someone dripping food onto their shirts is funny to some.)  The movie’s premise seemed ripe for a bloody good time, but alas, we don’t get much in that department. 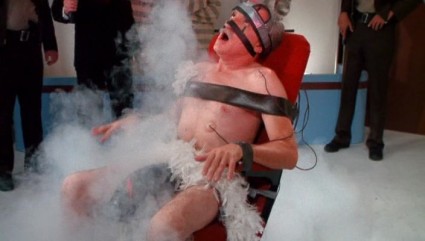 Presented without comment, an old man getting his nuts roasted.

It’s far from perfect and not as funny as it wants to be, the film offers a unique setting and provides some genuine laughs.  The 80s were full of oddball movies and this is just one of them.

Story: 5 – It’s not acted out very well, but I appreciated the dark sense of humour that shined through most of the lame attempts at getting a laugh.

Blood: 2 – The majority of the kills are off screen, such as a beheading, an electrocution and someone getting blowed up.

Nudity: 6 – A couple of quick topless scenes to make sure the guys disappointed by the lack of blood will say, “at least there were boobs in it.”

Overall: 5 – It’s not a rousing recommendation, but the movie does provide some twisted moments of genuine humour mixed in with a story that’s not quite as funny as it thinks it is.

-Despite any comparisons made between the movie and “The Running Man” they actually both came out the same year.