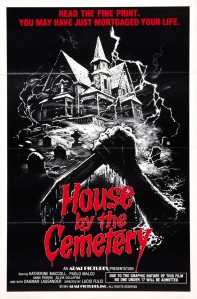 A small family moves into the old “Oak Mansion” where a grisly murder-suicide took place and they come to find out there’s an evil lurking in their basement.

Norman and Lucy, along with their son, Bob, are moving into an old mansion that actually belonged to a doctor colleague of Norman’s who apparently killed his mistress before killing himself.  Norman looks into the history of the house while researching his colleague’s work and finds that it used to belong to a Victorian surgeon named Freudstein who was known to conduct illegal experiments.  I bet they got this place really cheap!

Bob becomes friends with a little girl who has terribly violent visions and tries to warn Bob to keep his family out of the basement and probably should just leave the house.  Of course, it doesn’t take too long for whatever’s in the basement to get out and brutally murder everyone.  No one believes Bob when weird things start happening and people go missing.  Will the family find out the truth and get out before it’s too late?

Always remember to moisturize or else you’ll dry out.

The film comes from director Lucio Fulci, one of Italian horror’s most notable filmmakers.  His genre films were both celebrated and derided for their gory violence and incomprehensible stories.  The House by the Cemetery continues that tradition with a story that makes little sense and even less explanation for anything but provides creepy atmosphere, tense moments and brutally violent scenes, it’s a mixed bag of what to love and hate from European imports. 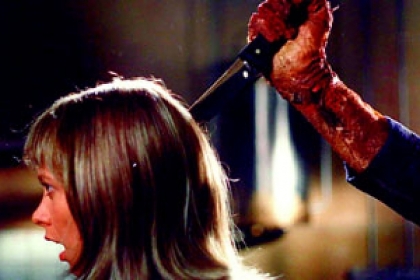 This movie doesn’t fuck around.

The loose plot threads I can deal with, sort of, but it’s even harder to figure out what’s going on with the terribly weak dub job.  The delivery is rushed at times and words are just said to fit the mouth movements.  It’s difficult to follow the story when the voice actors are in such a hurry to deliver their lines and some of the tension is lost later on in the film because of the hilarious quickness of the delivery.  The worst offender is the voice actor for child actor Giovanni Frezza’s character, Bob.  Annoying to the point of wanting to hit the mute button during Bob’s scenes, the voice is too high-pitched and just plain sounds like an adult trying to sound like a 6-year old.

What really bothers me is how they never explain how they get the blood stains out of that wood floor.

What the movie lacks in coherent storylines, it makes up for in bloody terror.  One of the infamous video nasties of the 80s, the movie wasn’t released uncut until 2009! The camera never, ever shies away from the violence and if you have a weak stomach then Fulci is not for you.  The movie starts with someone getting stabbed in the head with a butcher knife and doesn’t lighten up as the movie progresses.  Blood gushes out of every stab wound, neck slash and ripped throat.  If you’re looking for mercy, take your ass to church.

It’s a wonky story told horribly, which makes for some dull moments, but the last act is very intense and if you love gory effects you’ll get your fill with this movie.  Not one of his best, but still a Fulci classic.

Story: 4 – The main plot is convoluted and other plot lines get lost or are never explained.  You can kind of make sense of it by the end until the final scene when you can’t make sense of it.

Blood: 9 – The camera is right up close with every stab to catch every second of blood gushing glory.  A decapitation, mangled bodies are also featured.  Not for the faint of heart.

Overall: 6 – Bad dubbing drags the film down a bit, but the movie gets better as it progresses and a must see for the gore hound in all of us.

-The third film in Fulci’s “Death Trilogy” that also features City of the Living Dead and The Beyond.

-Giovanni Frezza was eight years old.  That’s kind of young to be throwing a severed head at a kid.

-Actress Catriona MacColl got over her fear of bats during the film.  There was a scene where the actor playing her husband is attacked by a giant bat.