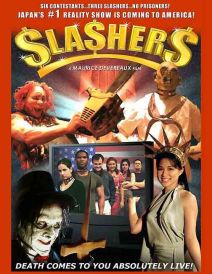 A group of Americans on a Japanese reality TV gameshow must fight to survive the night not only against each other but also against the stars of the show: a trio of masked killers.  Will anyone live to spend the giant jackpot?

$lasher$ is actually a popular Japanese reality gameshow where the contestants fight to win a large sum of money.  They can band together or go it alone, but they have to survive several hours in an enclosed area and when I say survive, I mean it.  Chasing the contestants down are a trio of masked killers with gimmicks like Chainsaw Charlie or Dr. Ripper who will kill them in violent fashion for the live audience and the incredible ratings.  The show is so popular internationally that the producers have decided to have an American special, which is where this movie begins. 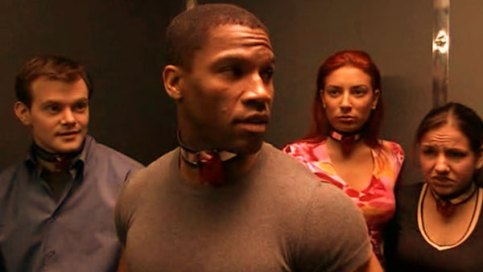 Guess who won’t be showing up next week?

A sextet of Americans are chosen to compete in the special, each vying for the jackpot which stands at a cool $12 million since no one won in the last game.  Each contestant is there for a reason, which they get into as the show goes on, because hey, it makes for good TV!  The reasons range from doing it for the money to showing up on a dare.  One girl hates the show and what it stands for and actively protests against the show while on screen.  Their foes this evening are returning slasher favourites, Chainsaw Charlie (a good ol’ boy who loves his chainsaw and doesn’t take kindly to rude people) and Dr. Ripper (a killer who uses the right tool for the job though with a flair for the dramatic.)  There’s a newbie slasher tonight as well, The Preacherman, a southern preacher who confesses to killing in the name of the Lord. 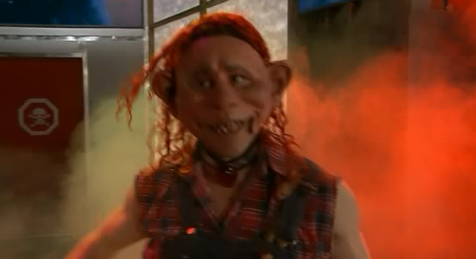 The first thing you’ll notice is that the film is quite low budget.  The actors don’t get any better than your average soap opera level of acting, the set is actually a large warehouse with several interconnected “houses” that look like a series of low level haunted houses from your local carnival (to those still exist?)  However, the film consistently works so well despite its low budget trappings due to the filmmakers excellent job with working with what they had.  The look of the film may be cheap, but it’s deliberate.  The writing is actually quite good, poking fun at reality TV which was still in its infancy back in 2001, and it’s only brought down by the lacklustre acting. 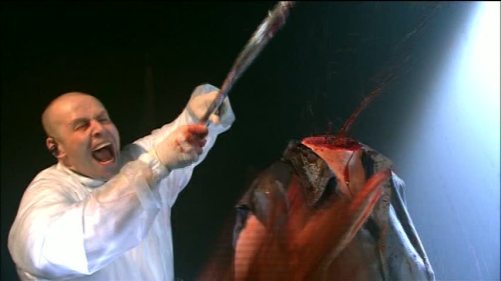 Well, he does enjoy his work.

Even the effects are pretty good, which is what you’d hope for given what the movie sets up for us.  Chainsaw Charlie doesn’t pussy foot around with his chainsaw as he saws a poor girl in half at the waist.  Dr. Ripper uses his giant scissors to decapitate another contestant.  I would imagine a good chunk of the budget went to making the effects look good and it was money well spent!

Overall, I didn’t expect much from the movie but having watched a previous killer gameshow film and coming away a little disappointed, $lasher$ comes along and delivered the goods I was looking for.

Story: 7 – It’s kind of like if “Running Man” just concentrated on the show itself.  The film contains great dialogue that melds the trappings of a slasher film with a television production to create a unique experience.

Blood: 7 – Plenty of gory kills mixed in with a few jump scares to keep you on your toes.

Nudity: 5 – Carolina Pla shows off in a bra while Sarah Joslyn Crowder shows off the goods in hopes of surviving the game longer.

Overall: 7 – A surprising hidden gem!  If you can get over the low budget feel, you’ll be in for a treat of a genre flick!