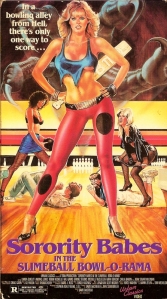 A pair of sorority pledges, a trio of dweebs and a bad girl must join forces to fight a genie-like imp from killing them inside the bowling alley he was held prisoner in.  Say whaaa?

-These girls don’t look like sorority sisters at all.  Or do they?  The 80s were a strange time.

-I’m not sure what a Slimeball version of bowling would be like…but I guess it involves tying up nerds and a giant fucking hand!

-Couldn’t the lady on the cover find a better shirt to wear?

“In a bowling alley from Hell, there’s only way one to score!”

The film opens with a trio of typical 80s nerds who are bummed out that they’re doing nothing until one of them pipes up about the nearby sorority having a couple of pledges trying to get in via humiliating spanking, whipped cream spraying and who knows what else?  The boys sneak into the house to get a closer look but get caught by Babs, the lead spanker.  On penalty of death, the boys are made to tag along with the two girls in their final stage of the Pledgening:  they must break into the bowling alley at the mall [Cool mall!] and bring back a trophy.  Babs’ father actually owns the place so she and her underlings will watch and see if they actually go through with it.

Who needs good marks when all it takes is a paddlin’ to get into a sorority?

After bumbling their way into the bowling alley, the group runs into Spider (Quigley), a bad ass babe who had already broke into the building to rob the place.  Despite Calvin (Jones), one of the nerds, attempting to get his mack on with her, Spider helps them get into the trophy room and they pick the big one.  The fat guy drops trophy and a creature emerges from the broken accolade.  Calling himself “Uncle Impy,” he/it hands out wishes to express his gratitude.  Those wishes, as tends to happen in such films, go bad and the imp magically locks the place up and ghouls up some of the Babes to do his bidding which is to kill the idiots.

I had a lot of reactions during the film, but my main take away was the incredibly odd story this film went through.  The film begins where many 80s sex-comedies normally would start with horny teens looking for hot women and their journey to find them but by the end, most of them are dead after having fought a magic demon imp while locked in a mall’s bowling alley.  Honestly, that’s pretty epic.  It’s also incredibly silly with it’s stereotypical take on nerds and treating sorority sisters as bimbos but you knew what you were getting into with a title like this movie has.

My voice will haunt your dreams!

The film keeps a decent pace though it has these moments where it slows to a crawl so we can eyefuck the shit out scream queens and frequently nude actresses Brinke Stevens and Michelle Bauer.  We practically see Stevens take an entire shower in one scene after getting sprayed with whipped cream.  Quigley somehow manages to get through the movie with only showing a bit of underboob.  Again, look at the movie title and try not to think that this won’t be one of the sleaziest films you’ll ever see.  If you’re of the politically correct types, what are you doing renting this? 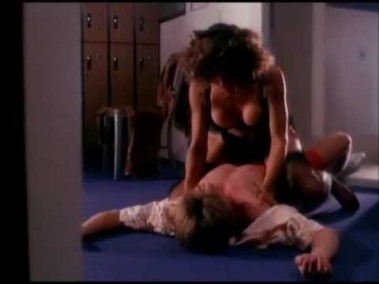 Soon I will kill you…

The film is obviously intending to make the audience laugh so it makes sense to have a wise-cracking villain, despite my objections with bad guys who talk too much.  Holy shit, the imp talks way too much, as if he’s getting paid by the word.  Voiced by musician and very part-time actor, Dukey Flyswatter, the imp is given a unique voice but as with many villains in these cornball flicks, he talks his victims to death trying to crack wise before he finishes them off and it gets annoying over the course of the movie.

Sorority Babes is a certainly a bad film in how it’s made but yet it’s also a fun watch, Uncle Impy aside.  The intentional humour isn’t all that’s cracked up to be but there’s enough unintentional humour (and nudity galore) to entertain until the end and then you can tell everyone that you watched a film called Sorority Babes in the Slimeball Bowl-O-Rama….but should you?

Blood: 3 – Oh there’s some blood, but it’s some low level stuff for the most part.  Maybe the goriest scene is seeing a demon bowl a decapitated head down the alley.

Nudity: 10 – While the camera may leer on naked ladies a little too long for some, if you’re looking for naked chicks the movie delivers.

Overall: 5 – I think for most of the general public, this is just a movie to be avoided altogether though I was mostly entertained by it.

-The voice of the imp in the trailer was much higher pitched but obviously changed in the final cut.

-The filmmakers had to rent the bowling alley after it closed because they couldn’t afford to film during regular operating hours.