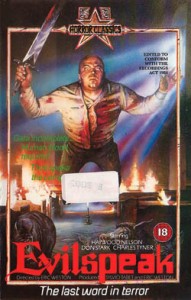 A young man in a military school (that seems to be treated like a high school) is bullied constantly and when he comes upon a book that allows him to summon demons through his computer, he doesn’t think twice about using it.  He must have a Mac.

A young Clint Howard, well on his way to being a murderous ice cream man someday, plays Stanley Coopersmith, a young cadet attending military academy.  His life is pretty awful since he’s bullied constantly for being an orphan and many of the school’s staff consider him to be a problem student and turn a blind eye to his plight; even the soccer coach colludes with the bullies to make sure he can’t make it for the big soccer game.  He leads a pretty unfair and miserable life and never once catches a break.

He is put on punishment duty and ordered to assist in cleaning out the basement of the school, which is several hundred years old and built on the land given to a Satanic priest named Esteban (Moll) during the Spanish Inquisition.  Arooo?  Coopersmith comes upon a loose brick in a wall and tears it down to find a hidden chamber filled with several texts, scrolls and books, among them is Esteban’s Book of the Dead.  Hell, even Esteban’s coffin is in there!  Being taught Latin in school, Coopersmith uses the academy’s computers to translate the book and comes upon passages containing black magic, blood sacrifices and hey, a way to bring Esteban back from the dead.  I see where this is going.

Enduring quite a bit more bullying in one day than most do in an entire high school year, Coopersmith brings one of the computers into the cellar to finish translating the book. He’s given a list of ingredients needed to summon Satan…or Esteban.  Someone evil. After a failed first attempt, the computer tells him he needs human blood and a consecrated host to finish the process although the computer, possibly containing an evil spirit at this point, helps Coopersmith along the way.  When the bullying cadets are involved in killing Coopersmith’s recently adopted puppy, he’s driven to finally resurrect Esteban and get revenge on those assholes at the academy.

A killer ice cream man? I can play that!

It’s just your basic nerd getting revenge on his tormentors but with a craaaazy twist.  Merging black magic and computers back in 1981 seems to be quite a stretch and I’m not sure how it even works to be honest. Just an oddball science thingy you just take as it comes. As strange and dated as the film is –those computer effects, a scene in a roller rink!– I had my eyes glued to the screen to see what would happen next because one minute you’re watching a shower scene, the next a bunch of boars break into the house and eat that person.  Seriously, there’s lots of those unexpected scenes in this film.  I must say seeing Howard floating in the air whacking people with a sword is pretty damn entertaining as ludicrous as it sounds. 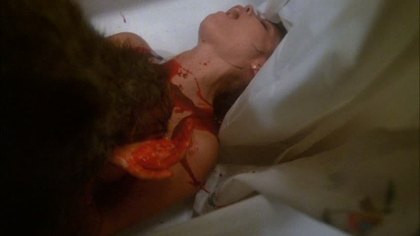 I suppose this film was considered pretty violent and a little intense back in 1981.  It was one of the few films that were labeled “Video Nasties” in the UK back then which were films that were initially banned mostly due to strong violence on screen.  Or maybe they didn’t like all the mentions of Satan?  That could be it.  The film is still considered fairly violent and some of the effects aren’t too bad thirty years later.  There are enough decapitations to make you think this was a Highlander film, a few impalings and more than your average amount of boar attacks.  Strange but satisfying.

I don’t know who I can recommend this for, it’s like a demonic Weird Science with a bit of Carrie thrown in.  If that sounds like your idea of a good way to kill 100 minutes then you’ll probably like this!

Story: 7 – The ultimate loser comes upon a Satanic book and attempts to resurrect an evil priest to get revenge on buttheads at school.

Blood: 7 – Some nice bloody effects for the most part but they do look their age now.

Nudity: 7 – A brief topless scene at the beginning and an extended shower scene are nice but both end in disaster.

Overall: 7 – You’ll have to go with the flow, and pretend you don’t notice Clint Howard’s toupee, but Evilspeak is an odd but very watchable film.

-The production did some filming in a South Central church that had been condemned and scheduled to be torn down. When the aged minister saw that the crew were refurbishing the church, he didn’t understand that this was “show business refurbishing” and that the church would ultimately be burned down, dropping down on his knees and thanking God. Nobody had the heart to tell him the truth.

-Anton LaVey, the late founder and High Priest of the Church of Satan, was a great fan of the film.