A group of thrill-seeking women go cave diving only to become lost among the caverns and then hunted by a group of unknown predators (possibly CHUDs) that have evolved to live in the dark.

The film starts out with a trio of women finishing up an intense white water rafting trip in Scotland before they go their separate ways.  Sarah is picked up by her husband with daughter in tow but disaster strikes early as they get into a head-on collision which kills everyone in the vehicle except for Sarah.  The film then moves ahead a year when the women are reunited along with some new companions to go on another thrilling adventure by going cave diving in the Carolinas.

No seriously, there’s something behind you! For real!

Juno, the biggest thrill seeker of the bunch, has got everyone together with the intention of going to a more touristy cave diving area but actually leads the group to a recently discovered cave system that hasn’t been mapped yet.  The women go down into the depths and initially have fun until they realize that this isn’t the cave they should be exploring and after a cave-in blocks their way back, they realize they’re trapped in a claustrophobic tomb unless they’re able to find another way out.  As they trek on, they start to lose trust in one another until a new threat shows up: humanoid-like creatures that live in the darkness are hunting the women down as prey. 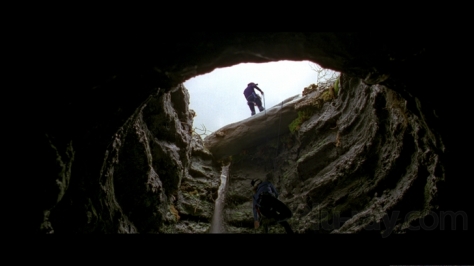 Hope we don’t run into any sandworms.

The Descent is a fantastically tense film that builds and builds towards the end and feels like it’s almost two separate movies, kind of like how From Dusk Till Dawn starts off as a crime thriller then turns into a gory vampire flick.  A good portion of the film is just about the women going into the cave and we watch as everything goes to hell.  It’s bad enough they’re stuck in a cave but they start to argue amongst one another and we learn that someone may have an ulterior motive for going into these caves and you’d think that would provide enough tension.  The monsters towards the end are the cherry on the top, as it looks like things couldn’t get any worse for these poor souls, they are viciously attacked by these creatures that no one expected to find and truly becomes a fight for survival.

It’s not easy being green.

When I said the creatures are vicious, I’m not kidding.  They rip and tear at their victims, slashing their throats or tearing them apart.  One woman even comes across a gore pile of bones, bodies and lots and lots of blood.  The women fight back with what they have, very sharp cave diving gear, and use them to stab and slash back at the creatures.  It takes a while before you get to these scenes but they, as well as the bodies, pile up fast towards the end.

If you couldn’t tell, I really enjoyed The Descent.  There’s a straight forward story, interesting characters, awesome direction and hey, lots of blood.  If you haven’t seen it yet, you’ve had ten years to get up to speed.  Go watch it, now!

Blood: 9 – Most of it comes in the last half of the film but the blood drips everywhere once the creatures come out.

Nudity: 1 – Ehhh, the monsters are naked?

-The creatures were designed to look like Nosferatu and were kept secret from the cast and when they finally showed up they scared the cast off the set.