A collector of unique items comes upon two strangers and tells them individually scary tales based on Stephen King and Clive Barker short stories. 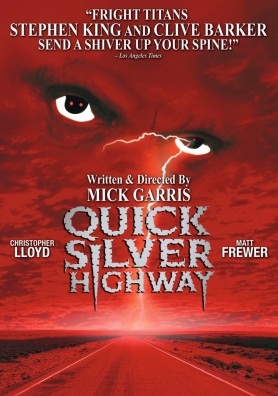 -Oh a red filter and giant eyes in the sky.  Scary.

-Oh they’re Christopher Lloyd’s eyes.  With lightning coming out of one!  Scary!

-Adapted from Stephen King and Clive Barker?  Nothing can go wrong here!

Two trips of terror for the price of one!

The film opens with a recently married couple broken down on the side of a highway waiting for help.  The husband decides to trek to the nearest town for help while leaving his bride with the car.  As day turns to night, a mysterious vehicle towing a trailer pulls over and a man named Aaron Quicksilver (Lloyd) offers the young woman some solace in his trailer while she waits for her husband.

I was frozen today!

Once inside, Quicksilver creepily tells the woman a story involving Bill, a travelling salesman (Sbarge) on his way home despite a severe sandstorm.  He stops into a gas station diner where a nice, older man gives him a set of oversized, chattering teeth to give to his son for his birthday although they don’t work.  So…thanks, I think?  Bill picks up a hitchhiker as well although they don’t get along and predictably the hitchhiker intends to rob Bill who’d rather wreck his vehicle than be a victim.  The hitchhiker does well enough to survive the wreck and goes after Bill when the metal chompers come to life and bite the hitchhiker to death.  Bill goes on to have a happy life, I guess.  Pretty unexciting episode really.

Yeah, that’s how I looked after the first short.

Mr. Quicksilver’s next story comes when a pickpocket working a local carnival happens upon Quicksilver’s tent of strange relics and items.  The pickpocket decides to hide out and listen to a story while the police are out looking for him.  This tale involves Dr. Charles George, a surgeon (Frewer) whose hands, with a mind of their own, want to be free from the shackles of their human oppressors.  Noticing a complete loss of his hands multiple times, , he visits a psychiatrist who believes it’s all in his head, but Charles knows the difference.  One evening in bed, his hands lash out at his wife and he unwillingly strangles her to death.  Afterwards, one hand cuts off the other to escape and start a revolution.  Knowing that the “king” hand is still attached to him, Charles still has a chance to stop the hands from taking over.

Friends, Romans, countrymen…lend me your, ew!

Taking the “Cryptkeeper” route to introduce the stories, Christopher Lloyd chomps down on the scenery before introducing a strange duo of adaptations from two of the biggest names in written horror — Stephen King and Clive Barker.  Is there a purpose to the stories he tells?  Apparently not, as even Quicksilver admits on both occasions, nor do they seem to really have any connection to one another.  So this is just two completely random stories to watch.  Alrighty. 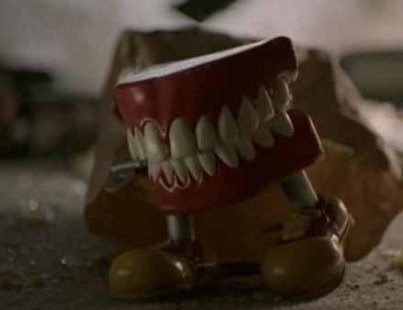 The first short, based on King’s short story “Chattery Teeth,” was pretty much summed up in my first paragraph.  It’s very dull with barely any tension to be felt and evil chattering teeth are neither funny nor scary.  It misses the mark in every way.  The second short, adapted from  Barker’s “The Body Politic,” while certainly not scary, has all sorts of humour to make it easily the more entertaining of the two shorts on the disc.  Watching a bunch of disembodied hands trying to organize a revolution running around on their own was bizarrely fun to watch and shows that this story has much more effort put into it.  It’s still not great by any means, but it ends the film on a bit of a high note before you forget you ever watched any of it.

You should see the steak dinner this movie bought me.

Quicksilver Highway feels more like a failed attempt at introducing a television anthology series than anything else.  The first short is a total loss but if you’re looking for a bit of grotesque humour then the second short may have something to hold your interest.

Story: 5 – Cryptkeeper Lloyd bookends two stories adapted from short stories written by Stephen King and Clive Barker.  The first is about a set of chattering teeth that comes alive and the second revolves around a body revolution as everyone’s hands want to be separated from their human.  Between the two, the second one is easily the better one.

Blood: 3 – The “Chattery Teeth” short is very light on blood, most of it stemming from the car wreck.  “The Body Politic” has the aforementioned limb being cut off though it’s not graphic.

Overall: 4 – Quicksilver Highway has the big names to draw you in but ultimately it’s only half good and the good half is pure wackiness (but admittedly a little fun.)

-Actor and magician Christopher Hart plays “Lefty,” one of the hands featured in “The Body Politic.”  But you may know him more as “Thing” from the modern Addams Family films.  Talk about being typecast.

-Clive Barker has a cameo as an anesthesiologist.

-Matt Frewer has been in five adaptations of Stephen King’s work; six if you include Lawnmower Man 2 but why would we?