After the loss of his wife, a veterinarian and his son move into a small Maine town to start over only to rediscover the horror of years ago involving a Mi’kmaq burial ground parading as a pet cemetery that brings the dead back.  Once again, we have to learn that sometimes dead is better. 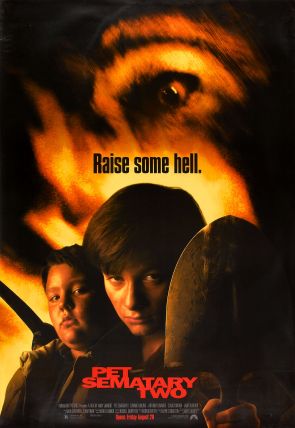 -What is that in the background, an evil duck?

-How often does a movie based on a novel get a sequel based on nothing?

-I guess the movie didn’t do very well since we never saw such releases as Misery 2, Christine 2, IT 2, etc. though who am I kidding?  Children of the Corn has almost ten movies, Mangler has 3, Carrie got a sequel and even Lawnmower Man got two films though Mr. King would rather you forget those.

Jeff’s (Furlong) on the set of his mother’s latest film, a low budget horror affair that looks fun despite the budget.  The safety standards a little lax on the set however and Jeff’s mother is electrocuted and dies a grisly death.  Temporarily separated at the time, Jeff’s father, Chase, is heartbroken upon hearing the news and eventually takes his veterinary practice to another town as they move to Ludlow, Maine to start over.

So this is where my career will go.

Immediately bullied by asshole kids at school, Jeff does make a friend in Drew whose stepfather, Gus, is also the town sheriff.  The school kids tell Jeff about what happened years earlier with the Creeds, whose cat then son were brought back to life.  It’s not long before the story is put to the test when Gus shoots Drew’s dog, Zowie, after going after his rabbits.  Drew buries Zowie in the old part of the pet cemetery that the story tells about and wouldn’t you know, Zowie comes back but with a chip on his shoulder. 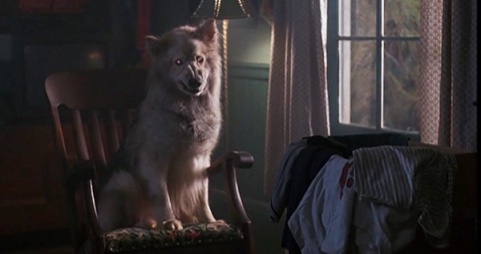 Lemme guess, you had a bad dream and I was in it?

Gus and Drew bring Zowie to be looked at by Chase who’s perplexed about several things, such as the lack of a heart beat.  Zowie escapes back home and in a moment in protecting Drew, Zowie tears out part of Gus’s throat.  The boys bury Gus in the ground since it worked so well with Zowie.  Gus comes back, nicer and quieter than before, though he too eventually goes violently crazy.  Realizing what he has at his fingertips, no matter how awful the outcomes are, Jeff puts a plan in motion to reunite with his mother. 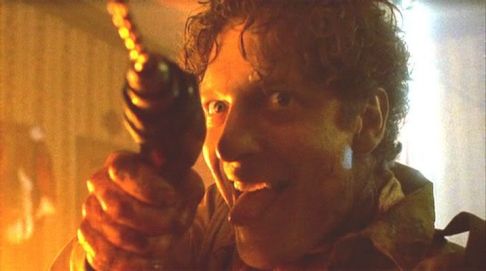 I’ve always had mixed feelings about Pet Sematary Two, the sequel to one of my favourite Stephen King adaptations.  Hoping that the sequel would expand on what King brought forth in his novel, the film disappointingly retreads a lot of the same themes and tones of the original though without much of the emotion involved.  The sequel is also laced with numerous call backs to the original film with the Creed house and tombstones being seen briefly as well references to the characters’ themselves though they’re told as if they were more folklore than fact despite happening just a few years prior which is odd.

I’m here for the Thriller auditions.

There is more reliance on graphic violence over scares, which is fine for the most part considering Pet Sematary was also fairly graphic, but the film carries a mean streak a mile wide so it’s hard to enjoy these scenes which are sadly also the best part of the movie.  The effects are gruesome but the rest of the film feels like you’re watching a direct-to-video sequel that would rather retell the original with different characters.

Story: 4 – A father and son lose their wife/mother in a terrible accident and move to a small Maine town where a local legend about a pet cemetery able to bring back the dead comes to surprising life.  Basically a retelling of the first film with more effort put into the effects.

Blood: 7 – Yeah I’ll give the movie it’s due, it’s bloody.  The opening electrocution features some burnt flesh, there’s plenty of gaping, open wounds caused by gun shots or even an electric drill.  Some gross stab wounds from a shard of glass and a melting body show towards the end show a lot of effort put into the special effects.

Nudity: 1 – Brief scene with many a quick boob shot but the later scene with a reanimated Gus forcing himself on his girlfriend will kill any boner you may have.

-This was Edward Furlong’s next film after the blockbuster Terminator 2: Judgment Day.

-Like the last film, the end credits contain a song by the Ramones, Stephen King’s favourite band.