A brain eating parasite named Aylmer escapes his elderly captives and finds a new host in Brian.  Aylmer secretes a hallucinogen straight into Brian’s brain and gets him hooked, all Aylmer wants in return is human brains to feed on.

The film opens with an elderly couple who freak out when they realize “Aylmer” has gotten out before feeding time.  They were planning on feeding him animal brains, so I can see why Aylmer wanted to get out.  In another apartment, Brian (Hearst) is in bed sick while his girlfriend (Lowry) goes out with his brother (MacDonald.)  While in bed, Aylmer latches onto Brian’s neck and introduces himself.  Brian lets Aylmer do his thing, secreting a crazy drug straight into his brain.  While Brian trips out, Aylmer is free to feed on unwilling victims by burrowing into their skulls and feeding on the gooey brains. 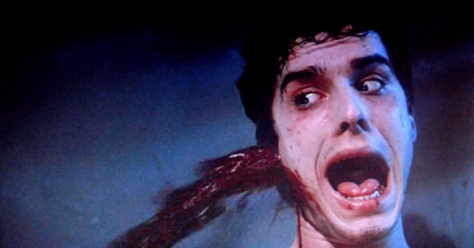 The film becomes the craziest anti-drug PSA ever as Brian realizes what is going on and tries to fight Aylmer’s advances but since he’s addicted to the drug that Aylmer secretes, he gets incredibly sick after the effects wear off.  Aylmer comes off like a nice parasite but it doesn’t take long for him to mock Brian for trying to fight him and waits for Brian to beg him for more juice.  To complicate matters, the former owners of Aylmer come looking for him and will do anything to get him back.

“Brain Damage” is a crazy, trippy gore film!  If you’ve run across any of Frank Henenlotter’s films (the Basketcase series, Frankenhooker) then there’s a reasonable expectation that you won’t be watching anything resembling a typical horror film.  Like any of his other films, the violence is quite outlandish and over-the-top.  While Brian is tripping out, he has some crazy visions and some turn quite nasty, including him pulling out his own brains from his ear, yanking that ear off and having a ton of blood gushing out of the resulting head wound.  And let’s not forget there is a parasite who loves to eat brains, even going through their foreheads to do so.  A gore hounds delight!

Of course I was going to show it.

Henenlotter’s films contain quite a bit of his trademark dark humour and its on full display with one of the more crazier death scenes I’ve witnessed in any movie. We see a woman going down on Brian and Aylmer comes out of his pants and leaps into her mouth.  It’s a full on alien blow job scene that I could only expect from the sick mind of Frank Henenlotter as she looks like she’s felating the creature who’s just taking an easier route to her brains.

Now, Aylmer himself is probably the make or break part of this film.  Much like the Belial creature from “Basket Case,” Aylmer is seen as a crude puppet with limited movements or moving in obvious stop motion animation.  Unlike Belial who is hidden throughout much of his movie, Aylmer is on full display in this film and probably has the second most amount of dialogue in the movie.  Belial didn’t move much and certainly didn’t talk.  Aylmer’s puppet/animation is a little more complex though as the creature’s mouth and eyes move to give him more of a personality and an attitude of a douchebag.

All in all, it’s truly a unique movie that really stands out.  It’s an interesting tale of a guy who’s addicted to a drug and it’s personified through a parasitic slug of a creature that actually berates him for not using the drug since it’s also the pusher (and a silly looking Muppet.)  Brian struggles on multiple fronts fighting with Aylmer, fending off Aylmer’s previous owners and keeping his girlfriend away though he loves her.  It’s a gory love story, awww!

Blood: 8 – Buckets of blood all over the place mostly caused by Aylmer’s attacks through victims’ skulls to eat their, I’m guessing, delicious brains.

Nudity: 3 – There’s some female T for the guys, some male A for the ladies.

Overall: 8 – I was reluctant about the film when I first saw the Aylmer creature, but getting over that minor quibble, “Brain Damage” provides a ton of gore for those who like their movies bloody while delivering an experience that dares to be different.

-Brain Damage was Henenlotter’s first film in 6 years after the original Basket Case.