An apartment building is overrun with demons that came out of a TV showing a horror movie about, you guessed it, demons.

The film opens with several residents of an apartment building watching a horror film on their televisions.  The movie they watch is kind of a sequel to the events in the first film with a group of teens trying to seek out demons.  They happen upon an old building with a corpse of a demon which they accidentally bring to life when someone drips blood into the corpse’s mouth and brings it back to life.  They kind of deserve what happens to them next. 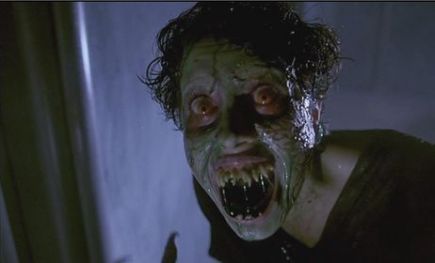 Get ready to see this same shot a dozen times.

Meanwhile, in the real world, there’s a birthday party going on for *looks up name* Sally, who locks herself in her room when told that someone she doesn’t like is coming to the party.  She locks herself in the bedroom and continues to watch the horror film.  A demon in the film takes special notice of her and walks toward the screen and actually comes out of the television and attacks Sally, turning her into a demon who goes on to attack almost everyone else and turn them into demons as well and spread out to the rest of the building until the survivors’ numbers dwindle down to single digits.

Am I watching “Demons” or “Videodrome?”

It’s not uncommon for a sequel to be similar to the original, but what’s odd about “Demons 2” is that it feels too similar to the first one; it feels more like a remake.  “Demons 2″ changes the setting from a movie theatre to an apartment building (complete with electronic locking system that goes on the fritz and traps people inside?)  as well as the demon delivery system being a TV screen.  Those differences aside, the film is remarkably similar to the first film, even down to re-doing certain scenes from the original “Demons.”  So basically, “Demons 2” is just a slightly different take on “Demons,” so it’s still good, right?  Meh.

Gone is the unique setting of a dim movie theatre, replaced with plain hallways and a parking garage that come off too brightly lit and make the demons look awful, certainly less scary.  In fact, the movie is full of poor lighting decisions, especially a strobe effect overused to the point of overkill.  WHY are the lights everywhere strobing, I don’t know!  I also don’t know if strobing is a word, but there it is.  Epileptics should avoid this film for that reason alone.

Ok, the demon dog is kind of cool.

The story in “Demons” was hardly perfect and it wasn’t looking to explain how these events were happening outside of clues provided during the movie on the screen, but “Demons 2” goes one step beyond by just having a demon come out of a TV, which is never explained or elaborated on, it’s just something that happens.  In the original, at least the demons can be traced back to the evil mask that spread a disease onto someone who passed it on through bites and scratches.  Maybe I prefer the evil mask theory to the demons coming to of the TV.  The only thing that’s engaging in the film are  the demon attacks, or at least you would hope so.

If there was going to be a saving grace, it was supposed to be the gore effects.  While I think the body count is higher in this movie, the effects don’t come off as well as they did before (maybe because of the bright lighting.) It’s not as though it’s not bloody, it’s just that even the effects pale in comparison to the original.  Even the scenes they try to replicate from the first movie don’t look as good.  There’s a scene in the original where a demon rips out of a human body to attack people.  A pretty cool scene, so the filmmakers did it again in this movie, only instead of having someone dolled up as a demon, a fucking puppet is used.  It may be one of the worst ideas used in this movie because it’s a long scene of a puppet jumping around screaming like a newborn baby.  With the strobe lighting going on!  If I wasn’t being bored by the film, it was annoying me to no end.

This thing is 100x worse than Jar Jar Binks.

I heaped a lot of praise on the original film, despite it’s flaws it was a fun watch.  I can’t believe this came from the same filmmakers.  Once again, Lamberto Bava is directing and Dario Argento co-wrote and produced the film so their names are all over the movie but this could be the worst movie attached to their names for it’s time.  It’s really stupid at times, it bored me, annoyed me, it’s nowhere near as fun to watch as the original.

Story: 3 – Basically the same movie with TVs instead of a movie screen but the movie makes even less sense than the first movie and is a confusing mess.

Blood: 5 – Plenty of bites and scratches but the effects are disappointing and tame by the original’s standards.

Overall: 3 – I really like the original Demons but the sequel comes off like a bad remake, everything about it pales in comparison to the original.  Except for the laughably bad dubbing, thank God they didn’t change that!

-At the age of ten, this was the film debut of Asia Argento, daughter of Dario Argento.

-There is an official third film in the series, 1989’s “The Church,” but is unrelated to the previous films.

-There was a TV film released in 1988 originally called “The Ogre” which was even directed by Lamberto Bava but to cash in on the success of his “Demons” series the film sported the full title of “Demons III: The Ogre” which, duh, has an ogre instead of demons so it has even LESS to do with the other movies.

-Creatures coming out of the TV, I feel like I’ve reviewed that movie before…