A network of psychic friends converge on an old hotel to find a colleague of theirs had killed himself after discovering the secret of Andre Toulon’s puppets only to be attacked by the puppets themselves when piecing together past events.

The movie begins back in the late 30s at the Bodega Bay Inn where an old puppet master, Andre Toulon, is hiding away his life’s work.  He was world renowned for his amazing puppetry because he had a secret: the puppets were alive.  Toulon takes his life before a pair of Nazis are able to get to him, keeping the power he had hidden away for over fifty years.

Fast forward to the present (as of 1989) where a psychic named Alex (Le Mat) can dream of the future, but has a hell of a nightmare.  He, along with several other psychics, are drawn to the hotel from the opening scene to discover that one of their colleagues, Nick Gallagher, had killed himself.  With the help of Nick’s wife, they trace back his past few days to see that he discovered Toulon’s secret but are attacked by living puppets that were once owned by Toulon.  Nick’s dead body moves around too though they can’t figure out why but start falling by the wayside to the puppets the closer they get to finding out what’s really going on.  When dead bodies start showing up in my room, that’s when I know it’s time to leave.

The puppets, of course, are the real stars of the film.  Each one is a unique character and has a role to play in their little group.  Pinhead is the muscle, he can subdue a full size person and with giant fists pummels a poor old lady in the face.  Blade and Tunneler are the ones that can do the most damage.  Jester acts as a decoy while Ms. Leech…well, she spits leeches from her mouth at will which is just disgusting.

The movie doesn’t go overboard with the blood which makes the climax of the film all the more violent.  The worst thing you’ll see until the end is a kind of bloody slit throat.  Most of the effects budget I think went to making the puppets work on screen.  Some scenes will have the puppets move with simple rods to work the arms and mouth while other scenes will contain pretty decent stop-motion animation for when the puppets need to be seen actually walking by themselves.  They’re very obvious but for a movie that’s pushing thirty years old, they’re not terrible. 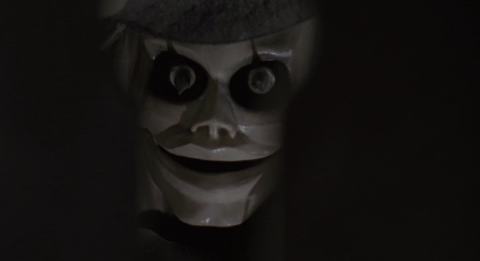 It’s easy to talk about the puppets, though the human characters are portrayed just as unique.  I think it’s bizarre that so many have to be psychics and with varying degrees of “power.”  Alex’s dreams show him glimpses into the future, so as the story progresses, he’s trying to edit these dreams together to make sense of it all.  One woman can live through the past just by touching objects, which is initially cool but she constantly uses this power to live through the sexual parts of the past.  Her husband is constantly trying to get her focus on the task at hand because she’s always getting horny.  This guy must be worn out 24/7.  There’s also what I think is a voodoo priestess but with a Southern belle accent.  The puppets don’t put up with her voodoo shit for long, thankfully.  How do these psychics not see any of this shit happening?

It’s hard to believe that this series has gone on for so long.  It has sequels, prequels, even a “best of” clip movie!  Believe it or not, the series is very much active with a TENTH film in the series released just a few years ago.  The quality of the films vary from film to film, though I’d consider this one of the better films in the series.  It’s only an average film at best but it lays a decent groundwork for the better sequels to come.

Blood: 4 – The climax is pretty brutal but what’s seen on screen is tame by today’s standards.

Overall: 5 – Compared to the rest of the series, it’s not bad, but judged on it’s own, it’s passable.  Only necessary if you intend to watch the rest.

-Pinhead’s fists are actually the fists of a dwarf stunt woman.  Just one of the many camera tricks used to show how well the puppets move.

-The look of the Blade puppet is based off actor Klaus Kinski, a favourite of director David Schmoeller’s.

-Puppet Master was originally intended as a theatrical release until it was given a direct-to-video release instead as producer Charles Band, head of Full Moon, felt he’d make more money that way.