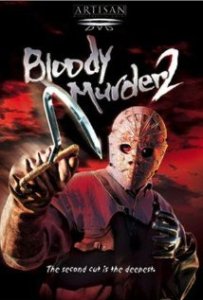 Young Tracy is helping close up camp for the summer but she’s having terrible nightmares involving her brother who was believed to be murdered by the masked serial killer, Trevor Moorehouse who may also be behind the killings of the current crop of camp counsellors.

To put it lightly, I did not enjoy my experience with the first Bloody Murder.  Looking back on what I had written, there was absolutely nothing to enjoy about the film which was by and large an extremely shameless rip off of Friday the 13th with nothing to redeem it.  It’s may be the worst reviewed movie on my blog since you can’t do worse than a score of zero.  So does the sequel fix anything or is it doomed to repeat the mistakes of its predecessor? 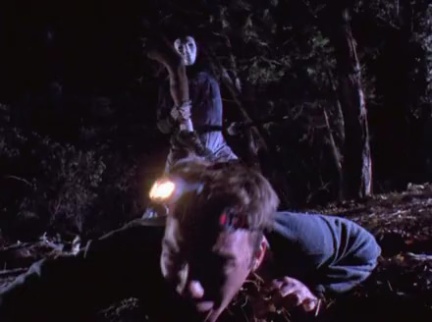 You’re not gonna need this!

Story-wise you can’t get much more basic with camp-based slashers than a group of counsellors who are closing up for the summer.  The heroine and villain are only loosely tied together as Tracy (Woodruff) has nightmares about Trevor Moorehouse because she was told he killed her brother (Jason, in the original film, hurrr) at the camp years ago.  It’s not until the end that the truth is actually revealed but it comes across as a convoluted twist that was popular during the “Scream” era of slashers.  It’s not great by any means but at least it looks like an effort was made unlike the first film. 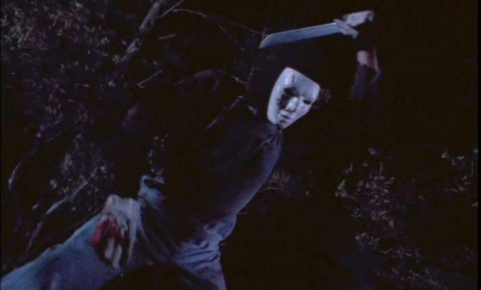 Why do you look different on the fucking box cover??

The sequel does address a couple of the bigger complaints about the original film: the blood and the babe factor.  The original film was as dry as could be and was insulting to anyone wanting to watch a slasher flick and not delivering on that aspect alone is a major sin.  BM2 thankfully doesn’t repeat that mistake and delivers quite a bit in the blood category.  Hacked off legs, decapitations, plenty of stabbings.  Not too bad!

Nudity isn’t a huge issue for me in films but it’s so prevalent and practically expected in slashers but it’s not a necessity to enjoy the overall film.  Bloody Murder 2 decides that we need that extra thrill and we got the gorgeous scream queen Tiffany Shepis showing off all over the place.  Very nice! 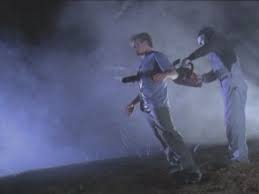 Uhh, the angle of the blade is…off?

The filmmakers also changed Trevor Moorehouse’s look and while it’s a step forward from the light blue mechanic uniform and oversized goalie mask, the black hoodie/overalls and pure white mask make him look something close to Michael Myers…maybe.  It’s still not a great look for the killer, still silly but like with anything else I can say about the movie, it’s better than the last movie.

So overall, the good news is that the film is certainly better than the original, the bad news is that while it’s an improvement it’s just an average slasher at best.

Story: 3 – I’ll give it a few points even though the plot does nothing to break the mould, at least there was an attempt made at telling a story.  Enjoy figuring out that twist in the end, it’s a doozy!

Blood: 6 – Not as fancy as the latest slashers but again, an attempt was made, an appreciated, with a decent amount of gore.

Nudity: 8 – Ah, Tiffany Shepis in for the win.  The lady shows off the goods in several scenes, thank you very much, Ms. Shepis!

Overall: 4 – Many steps in the right direction but everything ultimately adds put to an average slasher at best, which is a bit of a compliment compared to some of the slashers to come out in the early 2000s.

-In the United Kingdom, the Bloody Murder films were retitled as “Halloween Camp.”