Shaun vs. Tales from the Crypt Presents Demon Knight (1995)

Starring Billy Zane, William Sadler, Thomas Haden Church and Jada Pinkett (along with Mr. Futterman from Gremlins and the voice of Roger Rabbit for the hell of it.)

An artifact that contains the blood of Jesus Christ is being hidden away by a man sworn to protect it from an evil known as The Collector that seeks it out so that demonic forces can take over our world.  No pressure, dude.

Tell me if you’ve heard this one before?  Millions of millennia ago, the Earth hadn’t formed and there was a dark void that contained demons.  These demons had seven keys with which they controlled the cosmos.  God then created Earth, banished the demons and spread the keys to the far reaches of the galaxy so they could never bring them together again.  Fast forward to present day *cough*1995*cough* where the demons have six keys and are on their way to getting the last one that’s hidden on Earth.  A man who calls himself “The Collector” (Zane) is chasing down Brayker, (Sadler) the man tasked with protecting the artifact.  Brayer attempts to lay low in a rundown hotel where he and the unassuming motley crew of tenants wind up fighting humanity’s last stand. 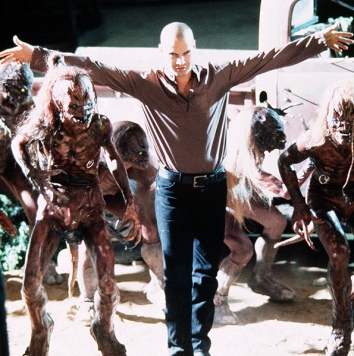 Riverdance of the Dead!

You just feel like saying, “Whoaaaa, whoa, that’s heavy!  Isn’t this ‘Tales from the Crypt?’  Very true, this is a movie based off the gruesome cable series that’s known not just for its’ bloody tone, but also for its campy, and often times dark, humor.  The filmmakers must’ve felt they needed to kick it up a notch (BAM!) when taking the show to the big screen.  But don’t let the far out plot fool you, there’s a lot of humor coming from every direction to lighten the mood when necessary.  Most of the humor comes from the evil Collector himself, Billy Zane, who seems to really enjoy chewing the scenery every chance he gets.  As bad ass as he is, he’s just so non-chalant about the whole situation, he’s just fucking with these pesky humans until he gets the key.  The asshole of the bunch, Roach (Church), also has a few good lines, even when confronted face to face by the demons he has something sarcastic to say.  So even though the underlying tone of the film is truly serious, you’ll find yourself chuckling and laughing along the way.

“And they paid me to do this!”

So now that the comedy is out of the way, let’s get the gruesome matters at hand.  The movie is quite gory, especially for 1995.  Not that there weren’t gory movies back then, but usually stuff  like this would be cut down theatrically.  The gruesome list of gore includes a punch through the head, eyeballs shot out/gouged out, limbs ripped off, people torn to shreds, beheaded, etc.  You can’t be disappointed with what’s on the screen.

It’s not often a TV show that gets spun into a movie winds up being any good.  Do you have horrible flashbacks to movies like Dark Shadows, Rocky and Bullwinkle, The Beverly Hillbillies?  At least Tales from the Crypt had a real shot at doing what these movies couldn’t do — be entertaining.  If you love the show, this is just an extended episode.  After the television intro, the usual Cryptkeeper shenanigans open the film as the ghoulish host sees himself going Hollywood before he sets the stage for his latest tale and really the filmmakers went out and hit a homerun with this film.  It has everything you love from the show just cranked up to 11.

Can you feel the love tonight?

There’s very little I can think of that I don’t like about the film.  The cast is great, all doing the job they were supposed to do and doing it well; it’s got more than enough gore, more than enough laughs.  It’s a personal classic, I enjoy it every time I see it.

Story: 8 – An awesome, though basically an extended, episode of a fantastic horror anthology.

Blood: 9 – It’s got everything a gorehound could ask for.

Boobs: 8 – If the scene of Jada dancing around in her underwear doesn’t do it for you, the filmmakers threw in a scene with a bunch of topless women.  Win!

-Demon Knight was supposed to kick off a proposed trilogy of Tales films but the other two, known as Dead Easy and Bodycount, were never completed.  A second film was made, Bordello of Blood, and a third film, Ritual, was later branded as a Tales from the Crypt film though it wasn’t originally.

-Due to budget issues, two scripts were made; one with demons and one without them. Executives figured a film called “Demon Knight” should have demons in it.  Brilliant move!