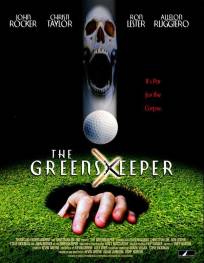 Here’s what I think the movie was intended to be: a comedy/parody of the traditional style of slasher flicks made famous in the late 70s-early 80s by purposely having terrible actors, dialogue, effects, etc.  I get that it’s ridiculously low-budget, cranked out to make a quick buck and join the legion of terrible horror movies that no one will ever remember.  That’s a pretty shitty concept that’s worked for far too long but the biggest sin that these movies can commit is to be boring and uninteresting which is exactly what The Greenskeeper is. 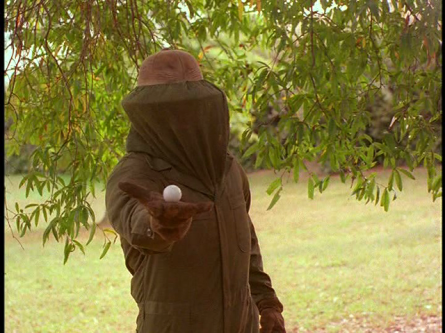 Your balls are filthy, I’m taking them to the ball washer.

As I mentioned, the film comes off as if it’s trying to be a parody so the story is the same old thing you’ve seen a thousand times.  Some dude was killed years ago but the legend goes he’ll come back from the dead and kill anyone in his way.  In this case, a grounds keeper was the person killed and the story goes he’ll come back and kill people on a golf course.  If that’s supposed to be hilarious, we’re off to a bad start.  The characters are all rich, snobby brats and act like the worst type of people in the world who spout the worst dialogue I’ve heard in some time.  It’s not just bad, it’s painful.

On second though, who needs acting skills?

But it’s trying to be like those old school slice and dice flicks, surely there is some redemption with lots of gore and maybe a smattering of female nudity?  Yes, the film is bloody but in a high school film project sort of way.  The, uh, unique setting of a golf course provides little variety for the kills.  The only kill that was different from the rest was the ball washer scene.  Throw in a lot of squirting fake blood and you can probably imagine the scene yourself.  Christi Taylor does take one for the team and shows off her Playboy magazine-worthy curves but it’s just not enough to warrant watching such a shitty flick.

Taking a dump is more entertaining than this flick.

That’s all, folks!  Nothing to see here, just a run of the mill slasher that liberally borrows from other, better films from decades past.  Don’t waste your time like I did!

Story: 2 – The filmmakers wanted to make a slasher about a killer grounds keeper so they took the plot of another film and sandwiched their killer in it.  That’s all.

Nudity: 7 – A quick topless shot of Christi Taylor was one of the few bright spots.

Overall: 2 – It’s so bad, everyone making the film had to know they were making a turd.  It’s not scary, it’s certainly not funny, there’s no reason to ever bother with this trash.

-The producers convinced now-retired MLB pitcher John Rocker to portray the killer Greenskeeper in the film.  Rocker is more well known for lobbying racial slurs at people around the same time so there’s your hook for the movie, I guess.

-Some of the music was performed by Kip Winger, yes, of “Winger” fame.