A genius when it comes to the human brain, Dr. Herbert West finds his way to Miskatonic University and convinces a fellow student to aid him in pursuit of his ultimate goal: bringing the dead back to life.  Getting kicked out doesn’t stop them either as they break into the school’s morgue and start to re-animate the dead which leads to disastrously funny results.

After a run in with the Swiss police over a little matter concerning the death of his professor via exploding eyeballs, Dr. Herbert West (Combs) arrives back in America to continue his research at the prestigious Miskatonic University in Somewhere, New England. He moves into the residence of medical student Dan Cain, who happens to also be going out with Megan, the dean’s daughter. While attending classes, West immediately butts heads with brain surgeon Dr. Hill over the subject of overcoming brain death — the very thing West is working on. Hill argues that after six minutes, death cannot be reversed but West says he has been able to go further than that. West has been researching and producing a serum (that really cool bright green liquid) that can bring the dead back to life as long as it’s within a short period of time. He even tries to re-animate Dan’s dead cat after it’s hit by a car because it’s a “fresh specimen.”

Uh, where’s the “Best Before” date?

West tries several other (slightly) dead bodies but it’s not until his big fight with Dr. Hill, which has been building the moment they met each other, that West gets his best chance ever to test his magic elixir while showing us just how insane yet dedicated West is to  his cause.  He decapitates Dr. Hill during the struggle and while the head is still fresh, he re-animates it along with the freshly decapped body just to see if they can work separately! West doesn’t see the worst side effect coming after re-animating Hill’s head, as Hill has a mental link to the other dead bodies that have been brought back to life, including his own body to cart him around when needed (like in Futurama with the body of Spiro Agnew carrying around Nixon’s head.)  Hill amasses a small undead army to go after Herbert West.

I have to be in the makeup chair for how long??

As you can probably imagine, the movie is quite bloody. Sometimes the blood is there to accentuate the brutality going on, but sometimes it’s just for shits and giggles. Let’s see, there’s exploding eyeballs, the run over cat, a decapitation, a good handful of re-animated bodies (or in some circles known as zombies) among other scenarios. Over 24 gallons of blood was used throughout the making of the movie with all the dismemberments and all, it really shows! 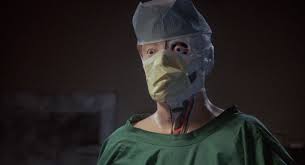 Acting-wise, Jeffrey Combs IS Herbert West, he defined the character and it’s the role he’s best known for. He must’ve had fun playing the usually reserved yet wacky character. West can come off insane, but he certainly knows what he’s trying to achieve when he uses the serum on different living beings so he’s still working through this personal insanity. Combs can even pull a great scene out of a talking head! But that talking head is pretty great too. David Gale is Dr. Hill, playing a pompous know-it-all brain surgeon who hates being overshadowed and called out on by West at any opportunity.   Even when he’s decapitated and technically shouldn’t be able to talk at all, he’s even more of a highlight for the film.  Bruce Abbott also does an admirable job as the straight man trying to make sense of what West has gotten him into.  For those looking for another type of titillation, Barbara Crampton does what she does best which is typically look good without a shirt on in one of the movie’s most memorable scenes as she gets head from Dr. Hill’s head. Yeeeeeeh!

Other than a couple of effects that don’t look very good in this day and age, I’m pleased to say that the movie is still awesome. With all the remakes being made, I’m a little shocked this has never been mentioned, but that’s alright, this is one of those gems that can still be enjoyed no matter its age. It’s always been considered a cult classic but for horror fans this is required viewing, you MUST see this film.  To put it simply, this is a great film and one of the few movies that has ever combined horror and comedy and made it really work. Combs owns the role of Herbert West and you won’t believe some of the things you’ll witness.

Story: 9 – Bringing the dead back to life is nothing new (Re-Animator was actually H.P. Lovecraft’s own re-telling of Mary Shelley’s Frankenstein) but they go to great lengths to do something new.

Blood: 8 – See the brief listing above, lots of good stuff.

Boobs: 6 – Just one scene, but Barbara Crampton brings a lot to the table before Dr. Hill ruined it.

Rating: 10 – Re-Animator is a must watch, no doubt about it.

-An actual dead cat was used for the scene with Dan’s cat in the fridge.

-The first man who is re-animated at the morgue is Peter Kent, who was Arnold Schwarzenegger‘s stunt double on fourteen films from The Terminator (1984) to Jingle All the Way (1996).