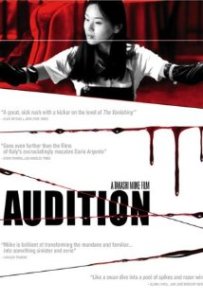 Aoyama, a long-widowed father, is urged by his son to get out there and find another woman to love.  After speaking with a friend who also happens to be a film producer, he meets several women who think they are taking part in a film audition, until he meets the perfect woman.  Or so he thinks.

The film opens with Aoyama next to his wife who is dying in the hospital while their young son is on the way to deliver a “get well soon” card to really make you feel bad when she passes away before he gets there.  Aoyama dedicates his life to looking after his son but years later his son urges his father to date again and be happy since he’s tired of seeing his father so sad.  Aoyama brings up the possibility of dating with his film producer friend, Yoshikawa, who comes up with a mock audition to find the right woman for him.  After meeting dozens of women, Aoyama becomes enamoured with Asami, a beautiful and quiet woman that he can’t stop thinking about.

Yoshikawa has reservations about Asami as he tells Aoyama that he can’t contact any of her references and her most recent boss has gone missing.  Despite Yoshikawa’s warnings to hold off, Aoyama eventually breaks down and calls Asami and they go out on a few dates.  She opens up to him about her abusive past, with the scars to prove it, and wants someone to love her exclusively.  He pledges that will love her and do nothing to harm her.  She disappears that evening and Aoyama begins to search high and low for her.

Her milkshake brings all the boys to the yard…but then she throws it up.

As Aoyama uses her resume to try to track down where she may be, he is taken down a dark and violent path as he meets people who may have run into Asami and met her bad side.  Shaken up by discovering her past, Aoyama returns home too late to find out she’s been in the apartment and after seeing Aoyama’s wife’s picture, she’s just dying to see him one more time.

A good portion of the film is given to Aoyama and his plight as a single father and lonely man looking for love.  You can’t help but feel bad for the poor guy, especially after watching that opening scene losing his wife.  All we want to see is the guy be happy and he almost finds it until this insane woman shows up in his life.  There are little hints dropped along the way that she’s not right in the head, and especially being a Japanese film, these hints can be quite weird.  The people that Aoyama runs into while searching for Asami, many of them are missing body parts.  Asami herself lives in an empty apartment with a sack that contains a still living, though very mutilated body that she keeps as a pet — and if that’s weird enough, she feeds the poor guy her own vomit.  Yeah, the movie goes to some strange places to make sure you’re uncomfortable.

This scene is not as hot as you expect.

Speaking of being uncomfortable, the film’s unflinching violence is almost guaranteed to make you squirm.  Director Takashi Miike can be pretty sick and never shies the camera away from the brutal torture Asami brings to the table.  Without giving away too much detail, you’re gonna be dealing with scenes involving needles and piano wire and good luck not watching these scenes all the way through.  Bleh. 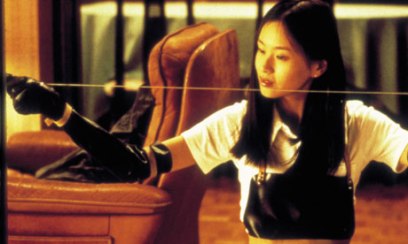 Oh the things she can do with string.

Overall, Audition is a film lulls you in with a quiet half before doing a 180 and becoming a tense, squirm-inducing torture fest that’s hard to watch.  And that’s why I love it.

Story: 8 – A great story that pulls you in and then dares you to turn it off when it gets too intense.

Blood: 8 – Though the film is light on actual blood-letting, you don’t need to see red stuff to curl up in a ball when things turn for the worse.

Nudity: 3 – You don’t see much skin, most of the sex is soap opera-like.

Overall: 9  – Audition may not be everyone’s cup of tea, there are subtitles after all, but those willing to give the film a shot will be rewarded with an intense last act that makes the film worth a watch.

-Genre filmmakers such as Eli Roth, John Landis and Rob Zombie have gone on record saying the film is unsettling to watch.  Quentin Tarantino has gone on to call the film a masterpiece.

-Actress Eihi Shiina is a method actress and the vomit that’s thrown up is really her vomit.

-When the film was first being screened at festivals, there were many walkouts and someone even passed out watching the film.