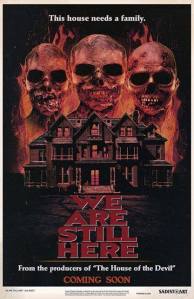 Set back in 1979, a grieving couple moves into a house out in the country to try to get over the death of their son.  However, the couple become the target of an evil entity living in the basement of the house, an evil that feeds every few decades and needs a family.

This house needs a family.

Paul (Sensenig) has decided to move from the city to the open country, hoping that a change of scenery will snap his wife, Anne (Crampton) out of her lingering grief over the loss of their son, Bobby.  They move into an old New England country home, originally built as a mortuary back in the mid 19th century.  A few weeks pass and they get their first visit from their neighbours down the road, Dave and Cat, who let them in on more back story than anyone would ever want to hear.  The original owner of the house allegedly sold the bodies he was meant to bury to universities and buried empty coffins.  This led to a backlash from the townspeople who drove the family from the town never to be seen again.  As they leave, Cat gives Paul a tiny note basically telling him to get the hell out.

I wouldn’t invite them back over for dinner, honey.

Anne believes that the spirit of their son may have followed them to the house because she senses something else with them and invites her hippie/psychic friend May (Marie) and her husband Jacob over to figure out if it’s indeed Bobby lingering in the house.  Not believing in the supernatural, Paul goes along with the plan in hopes of snapping Anne out of her depression and deals with the possible supernatural events happening in the house with reason and logic though he has a hard time figuring out why it’s over a hundred degrees in the basement. 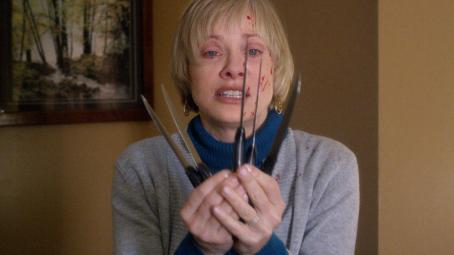 Those aren’t necessary for the Catwoman tryouts, ma’am

Events start out spooky but harmless, like broken picture frames, though whatever evil lives in the house doesn’t waste time on intruders it doesn’t like.  May’s son, Harry, and his girlfriend arrive while the two couples are out getting gawked at in a restaurant by the townsfolk.  When they start to fool around they are led into the basement where the evil manifests itself as a trio of ash-covered corpses, still burning long after death.  When the couples come back from dinner, the house is as it was when they left, as if no one had been there.  The house isn’t satisfied with just two souls; it wants more. 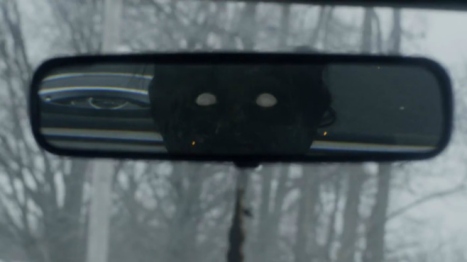 It’s easier doing this than floating after you.

I didn’t know much about We Are Still Here going into it.  The trailer caught my interest and when I dug a little deeper, I was pleasantly surprised to see that the producers behind Ti West’s fantastic The House of the Devil were behind this as well.  I also read that the filmmakers were especially inspired by Lucio Fulci’s fun gorefest The House by the Cemetery so I was definitely on board with We Are Still Here and I was not disappointed.  The film begins as a slowly-paced thriller, letting the story build while we get to know our lead cast a bit more.  The film then ramps up to become a fantastically gory, supernatural revenge story that was pretty awesome.  There’s very little I can say that’s bad about the film, it was a fun watch and I recommend anyone take a chance on it, especially if you dug the films that inspire this one.

Story: 8 – A family looking to get away from it all become the target of spirits determined to welcome a new family into the house…as supper.

Nudity: 0 – Not even naked zombies.

Overall: 8 – A terrific throwback to an Italian master as well as a great supernatural thriller on its own.

-When Dave talks about the mortician selling bodies to a university, he specifically mentions Essex County which is a reference to Miskatonic University in the works of H.P. Lovecraft.

-The filmmakers bought the 70s era clothes at thrift shops while the older automobiles were donated by the locals in the town they were filming.