A professor’s assistant is paid off to speed up a secret experiment for a rival and winds up turning the victims into killer mutants.  At least that’s what I hope it’s about.

-Nightmare Weekend…well, I’m expecting evil clouds or fog or something will be ruining this young woman’s dreams.  That doesn’t sound great.

-I’m not sure if the cloud is evil, but it’s pissed about something for sure.

The movie that ruined my weekend.

I realize what I’m typing will not make much sense but you’ll have to bear with me because I’m just describing what happens in the film which opens with a dude trying to scale a mansion and somehow getting his face melted off via a silver ball created by a computer while his brother watches on in horror as he watches his brother splat on the ground.  Roll the credits!

The cause and solution to all the movie’s problems.

The computer in the opening scene, known as Apache, was created by a professor who wants to use it to better the minds of people who need it, like those who are mentally challenged or the criminally insane.  Apparently this can be done by feeding giant silver balls to people which somehow “fixes” them like magic though there is some scientific mumbo jumbo tossed about to make it sound legit.  That doesn’t explain how it blew someone’s face apart earlier.  The professor’s daughter, Jessica, has invited some friends over to hang out which is terrific for the professor’s evil assistant who is working for a rival who wants her to speed up the process by using anyone in the home as a guinea pig to see what the computer can do at a hundred percent. 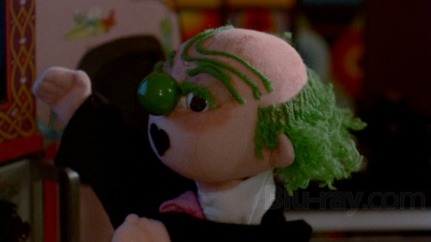 The movie instantly becomes Sesame Street before you know it.

The professor has also created another computer for Jessica, which is a robotic puppet named George which also can connect with Apache and do even more magic things.  An early example in the film is when Jessica wants to play a racing game so she grabs a Colecovision wheel and through Apache, George lets her control the professor’s assistant’s car, nearly killing her in the process.  Yes you read that right, George is a puppet and it talks back like a robot.  I hate him.  The assistant begins using the machine for her nefarious scheme and it winds up turning the victims into mutants (as referenced on the back of the box anyway) because of course it does, this computer can do everything. 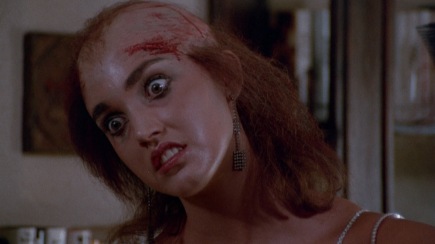 I’d be doing this if I still had hair.

Does this movie sound like it doesn’t make much sense?  Weird, huh?  I get that feeling too.  Someone must have thought it did to release this as is but if there was an understandable plot, it was edited out of existence.  The acting/dubbing is laughable because of the dialogue they are forced to repeat.  The plot devices are the worst with not just one computer that can do everything, but a puppet-controlled second computer is on hand as well.  Unbelievably bad at every moment, the film provides a few awkward laughs from time to time but that’s all you can expect to get out of this turkey.

Story:  1 – I honestly had a hard time trying to figure out what was going on.  Nothing made sense and the awful dialogue certainly didn’t help either.

Blood: 4 – The effects aren’t great, but I’ll give points for trying to be over-the-top.

Nudity:  8 – Oh there’s plenty of titillation in this flick, boobs a plenty!

Overall:  2 – I did not enjoy my time over Nightmare Weekend and probably won’t return for another chance.

-Filmed by a primarily French crew, two scripts were used to film the movie: one in English and one in French.

-The George computer is actually a Coleco ADAM computer and the racing game featured is a port of SEGA’s Turbo.

Categories: Featured, Worst of the Worst